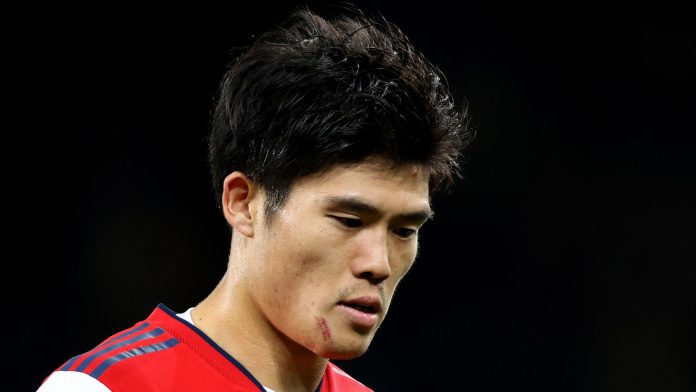 Should Ben Godfrey have been shown a red card for his challenge on Takehiro Tomiyasu in Everton’s 2-1 win over Arsenal on Monday Night Football? Former Premier League referee Dermot Gallagher is back with his verdict…

INCIDENT: Ben Godfrey survived a VAR check for a red card after standing on Tomiyasu’s face on his follow through. The Everton defender’s studs came into contact with Tomiyasu’s face and the incident was referred to VAR. VAR Stuart Attwell got referee Mike Dean to pause the game, however, the check was completed and no action was taken.

How the incident unfolded…

29: VAR CHECK! Out of nothing, we’ve got a potential red card on our hands!

Full marks to VAR official Stuart Attwell noticing Godfrey leaving his studs on Tomiyasu’s face after the Arsenal man goes down in a 50-50 between the pair.

Does he mean it, or is he just off balance? They’re still looking at it…

“Looking at that again, he’s bang in trouble. It looks like it’s something he could have avoided.”

30: NO RED CARD! I’m afraid to say the VAR monitor will have to wait for its first run-out. Attwell has another look and decides to wave it away.

“You just never know what conclusion they are going to come to.”

DERMOT SAYS: “For me, no, but there are going to be a lot of people that say yes. I spoke to people last night and this morning, and there are lots of mixed feelings.

“The reason I say no is because there is an element of doubt about it and because of a stamping situation, I’ve always taken the mindset that only he really knows. Going through the pictures and walking through it, you see the challenge and it doesn’t look good. His foot comes down, but his foot has to come down somewhere.

“You look at it from a refereeing point of view, well Mike Dean obviously doesn’t see the challenge because if he does, he will stop the game as it would obviously be a head injury. So, you presume Dean doesn’t see it, the game goes on and in real play it then defaults back to VAR Stuart Attwell and he looks at it.

“He looked at it in great depth, for a long time and I think he took the same view as me in that he couldn’t be convinced. So therefore, he had to clear it because the unfortunate thing is, there is nothing other than a red card. It’s got to be a red card or leave it as it is. There is no provision for a yellow card or a free-kick so, that’s where Attwell was sat.

“I know you still retain all options, but the likelihood is that if Dean is sent to the screen, looking at the pictures, it’s almost as if Attwell has led to believe it is a red card.

“So, if he doesn’t think it is a red card in itself, he clears it and it is cleared to nothing, and that’s an unfortunate part of the process that there is no middle ground.”

That decision is made, I’m sure the VAR has reviewed it, but I want more from my team.

Neville: He meant that | Carra: He’s a very lucky boy

FREE TO WATCH: Highlights from Everton’s win over Arsenal

Analysing the incident at half-time on Monday Night Football, Gary Neville and Jamie Carragher both thought Godfrey showed intent when his studs met the face of Tomiyasu.

However, Neville understood why VAR did not recommend a red card for the Everton defender, while Carragher described the 23-year-old as a “very lucky boy.”

“You are talking to two of the masters of following through into the face and trying to make it look like it is accidental,” Neville said on MNF.

“We think he definitely means that. You just know he’s there and he’s followed through over the top and he obviously tries to make it look he didn’t. The reaction after is where he realises what he’s done and it’s like, look it’s an accident.

“As a professional, he 100 per cent means that, but I can understand why VAR have said it’s accidental, we can’t prove it’s an obvious error.

“But as a professional, you know about it. He’s meant it, but I can see why it is not a red.”

‘It looks worse than it is’

“I saw the challenge on the monitor and when it slowed down because Tomiyasu is sliding towards Godfrey, who is in the air, he’s actually played the ball and is looking away. As he’s coming down you can’t stop where your foot is going to go, and it catches the Arsenal defender in the face.

“It looks worse than it is, and I think they got it right on the night, I really do.”