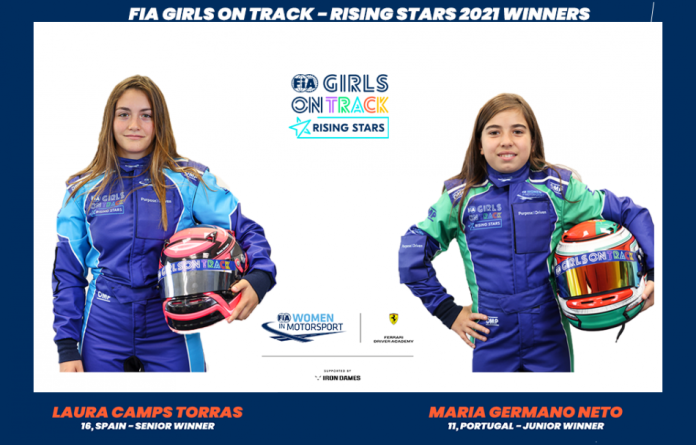 FIA Girls on Track – Rising Stars Senior driver, Laura Camps Torras (16 years old, Spanish) and Maria Germano Neto (11 years old, Portuguese) who participated in the Junior category, will receive the support of the Ferrari Driver Academy and Iron Dames as they are nurtured towards Formula 4 racing and competition in international karting respectively.

The second edition of the FIA Women in Motorsport Commission’s innovative talent detection programme has come to a successful conclusion with the FIA Girls on Track – Rising Stars partner, the Ferrari Driver Academy, confirming two young women merit support as they strive to forge a career in the sport.

The announcement comes at the end of a demanding programme of on and off-track assessments, workshops and training ahead of the concluding F4 and Karting Scouting with the FDA, where Laura Camps Torras and Maria Germano Neto each went head to head with three other drivers vying for this exceptional opportunity.

As a student at the Ferarri Driver Academy and under the guidance of expert coaches and engineers, Laura Camps Torras will follow in Maya Weug’s footsteps and benefit from an invaluable training and development programme. Laura will also join the Iron Dames, the FIA Girls on Track – Rising Stars main partner, in 2022.

Maria Germano Neto, at just 11 years old, also impressed the jury panel and will be taken under the wing of the Ferrari Driver Academy as its first and youngest Girls on Track – Rising Stars Junior driver. As well as being supported by them, Maria will compete in a season of international karting with Tony Kart in the OK Junior category, with the financial backing of the FDA. In the future, when she reaches the eligible age, Maria will also be entitled to participate in the Senior Girls on Track – Rising Stars selection process.

Jean Todt, FIA President, said: “The FIA Girls on Track – Rising Stars Programme, created by our Women in Motorsport Commission under the strong leadership of its President Michèle Mouton, is a success again this year. I would like to congratulate all the finalists who have demonstrated their talent, in particular the winners, Maria Germano Neto in Junior and Laura Camps Torras in Senior. They will take another important step in their young careers in the challenging environment of the Ferrari Driver Academy.  Thanks to partners and sponsors for their commitment and their shared vision for a more diverse and inclusive motor sport that provides opportunities for everyone.”

Michèle Mouton, President of the FIA Women in Motorsport Commission, said: “Once again it is an emotional moment for the FIA Women in Motorsport Commission as we see two more young women given a chance to prove themselves, thanks to our partnership with both the Ferrari Driver Academy and Iron Dames. With their support, Laura [Camps Torras] will get everything she needs to progress and develop her race craft. For Maria [Germano Neto], she is the youngest ever female to be coached by the Ferrari Driver Academy and this is an immense opportunity at such a young age. To have expanded the programme with Ferrari to support our really young racers is another great step for the programme and the young girls who will hopefully follow in Maria’s footsteps in the future. We will be following her progress in karting competition very closely, in the hope she can progress to Formula 4 racing with the Iron Dames when she becomes old enough. Finally, my congratulations to all 28 drivers originally selected to participate, and to all the drivers who were successful enough to reach this final stage.”

Mattia Binotto, Team Principal and Managing Director Scuderia Ferrari, said: “We are very pleased to welcome Laura to the Ferrari Driver Academy. She thus joins Maya Weug in strengthening the female presence in our Academy, confirming that Scuderia Ferrari shares the FIA’s vision of making motorsport available to everyone, without any distinction. The programme is a milestone in this FIA initiative, which we wholeheartedly support and I think it is one of the most significant legacies that Jean Todt leaves to motorsport at the end of his third and final term as President of the FIA.”

Marco Matassa, Head of the Ferrari Driver Academy, said: “What impressed us most about Laura was the speed at which she learned and her ability to put those lessons into practice, so that she progressed rapidly over her days spent in Fiorano. Laura started the camp quietly and ended it at the highest level. It was her ability to learn quickly, combined with the fact she had never driven a Formula 4 car before the test with the Winfield School at Le Castellet that gave her the edge over the others. We believe that at the FDA, she will make progress as a driver. We are already discussing a possible programme with her for next season and an announcement will be made shortly.”

Deborah Mayer, Project Founder of the Iron Dames, said: “I am very proud that the Iron Dames Project has played an active role in this year’s FIA Girls on Track – Rising Stars programme and wish to congratulate Laura and Maria on all their hard work and determination throughout the selection process. This is a great milestone for promoting female talent in motorsport and it signifies great synergy between the Iron Dames, FIA Women in Motorsport and the Ferrari Driver Academy. It is important that we promote female talent within the sport starting from a young age and provide them with valuable opportunities, both on and off track. Laura and Maria are still very young and with the right support as they continue their motorsport journey, I am convinced they will develop their skills even further. I wish them all the best!”

Laura Camps Torras, 2021 FIA Girls on Track – Rising Stars senior winner, FDA driver, said: “What an unforgettable day, it’s a dream come true! Maya is one of my benchmarks and it’s incredible to think that next year we will be classmates. Winning the final stage of the FIA Girls on Track – Rising Stars has made me realise that I did the right thing pursuing my goal over the past years. I will give my all from day one to prove my worth to the Ferrari Driver Academy. I can’t wait to start working with them to learn as much as I can and prepare as well as possible for a future in single-seaters. At such an important time, I’d like to thank my family, especially my father for encouraging me in this direction.”

Maria Germano Neto, 2021 FIA Girls on Track – Rising Stars junior winner said: “I am so happy. I cannot believe it. I have no words. Thanks to the programme, I learnt a lot on and off the track. It is an amazing opportunity. I did my best and will continue to meet the challenge.”

The FIA Girls on Track – Rising Stars is a four-year programme and, as such, 2022 will host a third call for talent among the FIA’s ASNs and the same process will result in more female drivers potentially becoming part of the Ferrari Driver Academy in 2023 and racing for the Iron Dames in F4.