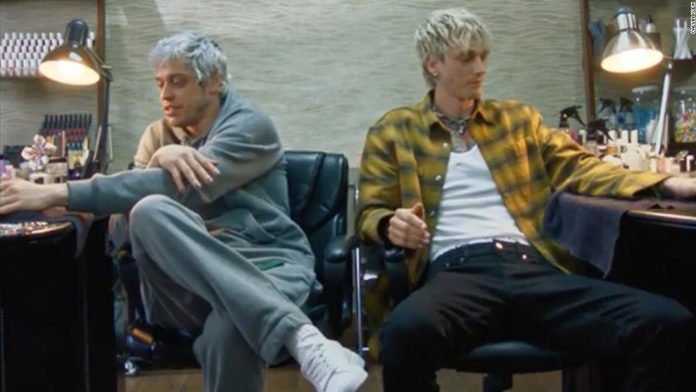 After appearing in their underwear for a Calvin Klein campaign on the brand’s Instagram Live on Monday, the two live streamed again Tuesday, hitting a nail salon for a side-by-side treatment.
“Beautiful, Colson,” Davidson tells MGK about his nails.
The duo rocked similar bleached hair as they introduced themselves to the nail technicians. Davidson joked everyone would have to sign a non-disclosure agreement to not discuss what they talked about in the chairs.
“Did we nail it or did we nail it,” they captioned their story.
Davidson and Kelly had also posed in Calvin Klein briefs on Monday, one picture showed Davidson on a couch as Kelly poured popcorn into his mouth.
“Nice stuff, by the way,” Davidson told Kelly during the shoot. “I get it now. Good for you. Good for you, dog.”
The brand also changed its profile photo to Davidson during the live story.
A rep for Calvin Klein says yet another iconic star is set to take overt heir feed this week.