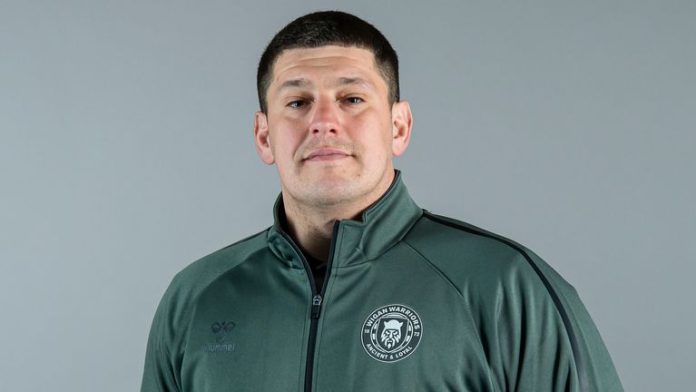 Ahead of the 2022 season, players from Wigan’s men’s, women’s and wheelchair teams are getting out and about to build something bigger than just the club; “Hopefully it shows the people of the town we’re a team worth supporting,” says head coach Matt Peet

Matt Peet knows from his own experiences the importance of Wigan Warriors’ players getting out into the community.

As a child growing up in the nearby town of Hindley, the recently-appointed Warriors head coach was inspired by members of the all-conquering Cherry and Whites team of the early to mid-1990s bringing the Challenge Cup into his school ahead of yet another Wembley final appearance.

Returning to St Benedict’s Primary School nearly a quarter of a century later as the man in charge of the first team during week three of Wigan’s ‘Warriors Unite’ community programme, the 37-year-old is keen to re-strengthen the link between the club and the people in the area.

❤️ 𝙒𝘼𝙍𝙍𝙄𝙊𝙍𝙎 𝙐𝙉𝙄𝙏𝙀: 𝙒𝙀𝙀𝙆 3@WiganWarriorsCF and the first team squad went out into the community once more for #WarriorsUnite last Friday, visiting the Hindley area.

“It’s amazing and it brings back some great memories,” Peet told Sky Sports. “It’s surreal to be here after so many years and I suppose not a lot of people get the chance to go back to their old primary school 25 years later.

“It’s really good and even better to see the club is getting out and about and encouraging the uptake of rugby league and sport in the schools.

“I remember being at this school and they used to have ‘Cherry and White Days’ in the build-up to Wembley where Wigan players would bring the trophy into the schools, or the school and shops would be dressed up in cherry and white, and you couldn’t escape rugby league in the town.

“We can’t just expect that to happen, we’ve got to drive it, and invest time, effort and energy into it if we’re going to build something bigger than just the team.”

It is not just Peet who has been getting out and about as part of the month-long programme, with players from the men’s, women’s and wheelchair teams among those leading rugby sessions and holding assemblies for pupils.

Although it is not unusual for players to visit schools as part of a club’s community work, this is the first time the Warriors men’s squad have had this involvement scheduled in as part of their pre-season training.

Among the players at St Benedict’s was Iain Thornley, who remembers Garry Connolly and Chris Ashton visiting during his schooldays in Wigan and has now seen things come full circle by doing his bit to inspire the next generation.

“It’s been really different,” Thornley told Sky Sports. “The fact that it’s scheduled in there and getting out, not only engaging with the kids but also other people in the community, we’re re-engaging with them and creating that bond again.

We’ve got to drive it, and invest time, effort and energy into it if we’re going to build something bigger than just the team.

“I’ve got kids myself, so I know what it means to them. You can see straight away the smiles on their faces and how much it means, the fact they’re getting to meet Wigan rugby players.

“That’s what we’re trying to create – that bond with Wigan Warriors and the community.”

It is not just school children who have been benefitting though, with Warriors Unite including an extension of the club’s Rugby Memories support group which helps supporters with dementia and tackles isolation, plus visits to supporters in hospital and Labour Clubs in the borough.

That all-encompassing aspect is why Guy Wood, Wigan’s schools education manager, believes this will lead to the Warriors making greater inroads in terms of engaging with the community.

“It’s the best initiative I’ve been a part of,” Wood told Sky Sports. “You’ve got a lot of school programmes going on in the borough, Greater Manchester and England, but this is unique.

“These kids have got the buzz from someone they aspire to be like coming to their school to give them advice.

“There were some great messages from the first-team saying the things that make them happiest the most are seeing their child stay in school, develop in maths, English and science, and school is something extra for them. To do something like this is amazing.”

Warriors Unite is something Peet is keen to continue with in some form when the 2022 Super League season gets underway, although by then the focus will be firmly on bringing a major honour back to the town for the first time since their 2018 Super League Grand Final triumph.

And while this is about building links between club and community, he is in no doubt the Warriors squad will feel the benefit from their involvement when they take to the field for the season-opener away to Hull Kingston Rovers on February 11 too.

“I feel this will have an effect on how we play for a lot of different reasons,” Peet said. “Getting the lads out amongst the people of the town gives them a little bit more of a sense of responsibility to play and represent the town well.

“They’re in small groups getting out so I think that improves the bond between them and hopefully it shows the people of the town we’re a team worth supporting.

“We hope to inspire the people of the town, but they also inspire us. We’ve got a special fanbase and they really are equally important as anyone else.

“We feel every fan is a part of the club as anyone else. We hope to represent them, and we know we play for them every time the lads take to the field.”