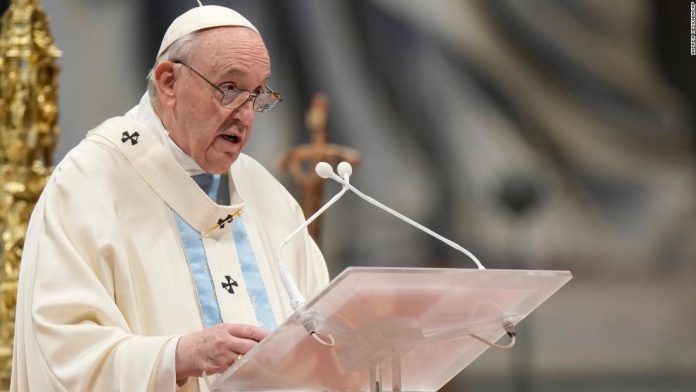 His address to the faithful from the Vatican in Rome during Saturday’s mass focused on Mary, the mother of Jesus, as Francis drew inspiration from her delivering her child in a humble manger.
“Mary now finds herself in the dark stable of Bethlehem. Yet that is where she gives God to the world. Others, before the scandal of the manger, might feel deeply troubled. She does not,” Francis preached. “Let us learn from the Mother of God how to have that same attitude: to keep and to ponder […] We hope that everything will be alright and then, like a bolt from the blue, an unexpected problem arises. Our expectations clash painfully with reality.”
He spoke out against violence against women as the homily drew to an end, saying: “And since mothers bestow life, and women ‘keep’ the world, let us all make greater efforts to promote mothers and to protect women. How much violence is directed against women! Enough! To hurt a woman is to insult God, who from a woman took on our humanity.”
Saturday’s mass was the first time since 2019 that the Pope has delivered the New Year’s Day homily, as he missed last year’s address due to sciatica.
The 85-year-old Pontiff was marking what the Vatican calls World Peace Day, on which Popes have delivered addresses since 1968. January 1 is also the Catholic feast day of Mary the Mother of God.
In his Christmas address last week, the Pope reflected on the pandemic, the impact it has had on our social relationships and our recent “tendency to withdraw, to do it all by ourselves, to stop making an effort to encounter others and do things together.”
In the same message, the leader of the Catholic Church told people gathered in St. Peter’s Square that the world had become so used to immense tragedies that “we hardly even notice them anymore.” The pontiff called for an end to conflicts throughout the Middle East and Africa, listing several places including Syria, Yemen, Iraq, Lebanon, Sudan and Ethiopia.