Home Culture Betty White: A look back in laughter 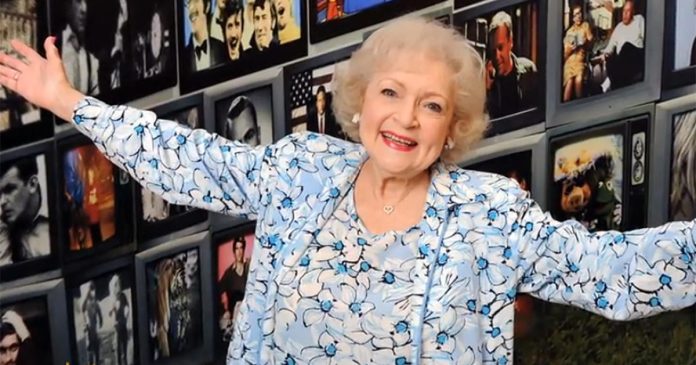 It happened this past Friday: The death of beloved comedienne Betty White, just a few weeks shy of her 100th birthday. Mo Rocca reports.

Rose (Betty White): “By the time I got to high school, the kids had made up this really mean nickname for me just because I had hairy legs.”
Blanche (Rue McClanahan): “What did they call you?”
Rose: “Rose with the hairy legs.”

As long as there’s been TV, Betty White’s been on it.

As the star of “The Mary Tyler Moore Show,” “The Golden Girls” and “Hot in Cleveland” told “Sunday Morning” back in 2011, “If you have one good series, you know, it’s a blessing. Two good series is unusual. Three is … where do you get privileges like that? I taste it every minute.”

Sue Ann: “That’s why you’re always avoiding me, because you know if you get too close, you’re afraid the little pilot light of desire that flickers within you might turn your whole oven on.”

White made her first appearance in the episode “The Lars Affair,” having an affair with the husband of Cloris Leachman’s Phyllis:

Correspondent Mo Rocca said, “There’s a great bit where Sue Ann Nivens pulls out a collapsed soufflé from the oven (“Oh, my baby!”), and then she closes the door with her knee.”

“I just remembered it as you said it … she was inventive,” Brooks said. “I think there was less direction of her than of almost anybody. She had it all. I think she could have been a tremendous dramatic actress if she’d wanted to.”

In 1985, White did a 180 and played lovably dimwitted Rose Nylund on “The Golden Girls.”

“I should have said no to the Miss St. Olaf’s beauty pageant. It was 1951. That was the first year they let humans enter, too.”

And in 2010, White co-starred with Wendie Malick in the TV Land series “Hot in Cleveland.”

Victoria (Malick): “Canoga Falls is naming the town square after me!”
Elka (White): “Did Canoga Falls lose a bet or something?”

Malick told Rocca, “I turned 60 on ‘Hot in Cleveland’ when we were working together, and she was on the cusp of her 90th at the time, and I looked at her life and thought, ‘Oh my God, there’s a whole other act ahead of me.'”

White’s career in television pre-dated television itself. Months before the medium was introduced to the public at the 1939 World’s Fair, 17-year-old Betty appeared on an experimental transmission in Los Angeles.

Off-screen, White had two great loves in her life: animals of all kinds …

“Oftentimes people would come up to her and say, ‘Oh, I want to show you a picture of my kids,’ and she’d say, ‘Oh, great!'” Malick recalled. “And when they would show them pictures of actual children, she would look so disappointed and say, ‘Oh, children.’ She was so hoping for her little lamb!”

The great two-legged love of her life was her husband, “Password” host Allen Ludden. She was a contestant, and he soon enough popped the question.

“I said no for a year,” White once said. “I wasted a whole year of time we would have been together. I might have been a pretty good game-player, but I was a dumb lady!”

After Ludden died, White kept on working, hosting “Saturday Night Live” when she was 88 – something Wendie Malick credits to her unfailingly positive outlook.

“I remember somebody coming up to her once – I don’t remember who it was – and said, ‘You know what I hate?’ And she said, ‘No, and frankly I don’t care to know.’ And that was pretty much Betty. She didn’t want you to dump your dark woes and worries and angst [on her]. She just wasn’t interested in that. It’s like you can always find something to be happy or grateful about, and she worked very hard at that. That was her credo.”

Rocca asked Brooks, “Why is she so beloved?”

“Betty was a deeply good person,” he replied. “There was something of a higher quality about her that I think everybody sensed. We all kidded around and palled around, but we treated her a little differently, I think. There was something special about her.”

Malick said, “I’m honored to be able to, like, say a few words about how truly wonderful she was. ‘Cause sometimes you’re asked to do these things and you have to sort of pull out the good parts and leave the rest behind! But with Betty there’s no need to leave the rest behind – it’s all good.”

White worried that people were sick of seeing her on TV. She even speculated this for her gravestone: “At last, she’s gone! She finally got off!”

But even at 99, Betty White left us wanting more.