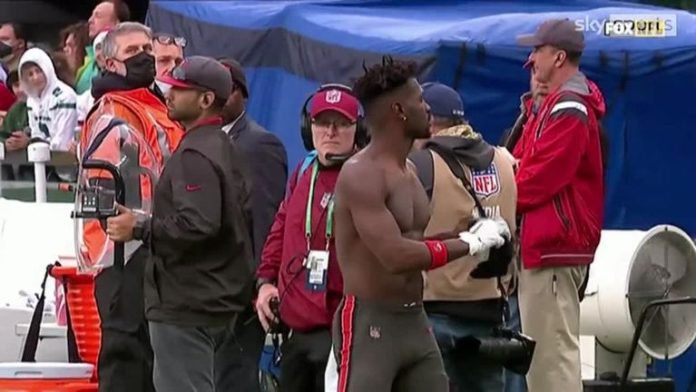 Antonio Brown removed his shoulder pads and jersey, ran across the end zone and headed to Tampa Bay’s locker room midway through the third quarter of Sunday’s game at MetLife Stadium against the New York Jets; Bruce Arians said: “He is no longer a Buc. That’s the end of the story”

Antonio Brown is no longer a Tampa Bay Buccaneer, says head coach Bruce Arians, after the wide receiver left the field during Sunday’s 28-24 win against the New York Jets.

Brown removed his shoulder pads and jersey, ran across the end zone and headed to the team’s locker room midway through the third quarter of Sunday’s game at MetLife Stadium.

The Buccaneers trailed 24-10 at the time and were driving downfield on offence, but Brown was not among the players in the game.

Asked about Brown in his post-match news conference, Arians said: “He is no longer a Buc.

“That’s the end of the story.”

According to the FOX broadcast, Brown “boiled over” about something and could not be convinced to stay with the team on the sideline.

Fellow receiver Mike Evans tried to keep Brown from taking off his shoulder pads, but to no avail.

Brown was seen standing in the end zone, making a “peace out” gesture to the crowd, while the teams were playing on the other side of the field.

Brown had three receptions on five targets for 26 yards at the time he left. He has 42 catches for 545 yards and four touchdowns in seven games this season.

The 33-year-old has a trail of off-the-field incidents, distractions and legal trouble dating to the start of his career with the Pittsburgh Steelers. Most recently, Brown was suspended for three games by the NFL this season for falsifying a COVID-19 vaccine card.

Brown spent the first half of the 2020 season suspended for multiple violations of the NFL’s personal conduct policy. He turned himself in to police in Florida in January 2020 due to charges of battery, burglary of an unoccupied conveyance and criminal mischief.