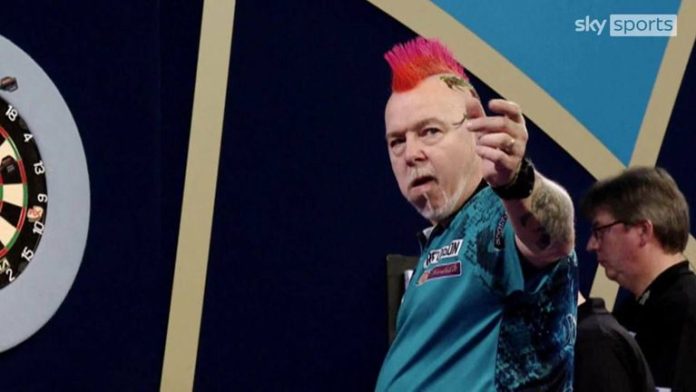 By Raz Mirza at Alexandra Palace

Wright collected a cheque for £500,000 before lifting the Sid Waddell Trophy once again on the stage having produced a brilliant performance, averaging 98.34 and firing 17 180s, in a 7-5 victory over Smith.

The world No 2 averaged a remarkable 113.93 for the last 10 legs, winning nine of them on his way to more glory at Alexandra Palace.

Wright, 51, told Sky Sports: “It’s not about me. It’s about the future of darts and this man (Michael Smith). He let me in. I just love him to bits. I feel bad. As soon as he gets a major, he will trounce everybody.”

The two best players statistically in the tournament went head-to-head for the biggest prize in darts, but they produced their worst set at this year’s World Championship to open proceedings.

What a World Championship. What a Final….got to feel for Michael Smith but Peter Wright produced some incredible #darts at the end….Hopefully Smith’s time will come 😎🎯

Wright, who revealed a knee injury had been causing him discomfort, soaked up two maximums to win a 15-darter in the opening leg. Smith levelled up, but only after throwing a remarkable 28 darts in the worst leg of the entire tournament.

It was the Scot who eventually wrapped up the set 3-1 after hitting double 4 and double 8 in legs three and four.

‘Snakebite’, who threw a tournament record of 24 180s in his semi-final victory against fellow Scot Gary Anderson, continued where he left off by powering in magnificent finishes of 148 and 124 to move two sets up, leaving Smith floundering.

But Smith, the runner-up three years ago, responded with back-to-back 12-darters and a majestic 167 checkout.

‘Bully Boy’ was throwing a barrage of maximums at the 51-year-old, and he survived a 117 finish and two missed darts for the set from Wright to draw level at 2-2.

Smith landed his 72nd maximum of the tournament – breaking Gary Anderson’s record of 71 back in 2017 – in a tight fifth set which went to a deciding leg, and it was the 51-year-old who eventually cleaned up 25 in two darts to regain the lead.

St Helens thrower Smith restored parity after winning the sixth set 3-1 with a 106 average before taking the lead for the first time with a nifty 93 two-dart combination in a clean sweep of set seven.

World No 2 Wright countered Smith by taking out 72 to rubber-stamp the eighth set 3-1 and make it a level game at 4-4.

Incredible standard in the last 10 legs by Peter Wright!

Congratulations to our new world champion @snakebitewright unbelievable last 2 sets. @BullyBoy180 played amazing all tournament and made a great final. Only a matter off time pal you know that

Although he started the next with a 103, the Scot squandered six set darts, enabling ‘Bully Boy’ to nail double 13 to move ahead in what was turning into another dramatic encounter at Alexandra Palace.

Wright struck with an audacious 81-bull finish before making it eight legs on the bounce with a classy double 9. Although Smith stopped the rot in the next leg, ‘Snakebite’ wrapped up the title with double 16.