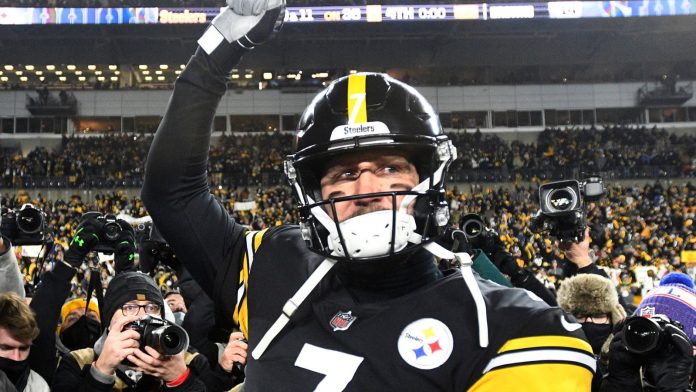 Pittsburgh pass T.J. Watt records a career-high four of his team’s nine sacks on the night to take the league lead with 21.5 on the season, placing him just shy – with one game still to play – of the official all-time record set by Michael Strahan for the Giants in 2001

Ben Roethlisberger threw a touchdown pass in what was likely his final home game in Pittsburgh and the Steelers kept their slim playoff hopes alive with a 26-14 victory over the already-eliminated Cleveland Browns on Monday night.

Though Roethlisberger was the focus going into the game, and during emotional scenes at the end where he appeared to bid an emotional farewell to his adoring fans, it was the efforts of rookie running back Najee Harris and the Pittsburgh defensive line – and specifically pass rusher extraordinaire T.J. Watt – that dazzled on the night.

What a moment for Pittsburgh. pic.twitter.com/AzU1AtwkFI

Watt recorded a career-high four of his team’s nine sacks as he took over the league lead with 21.5 on the season, placing him just shy – with one game still to play – of the official all-time record set by Michael Strahan for the New York Giants in 2001

Roethlisberger threw a five-yard touchdown pass to Diontae Johnson in the second quarter but, if this was indeed to be the 39-year-old’s last ever game in front of his home fans at Heinz Field, it was far from his best outing as he completed just 24 of his 46 attempts for a season-low mark of 123 yards.

The two-time Super Bowl winner with the Steelers, who turns 40 in March, has not officially announced his retirement from the NFL, but in the build-up to this game he did say “that all signs are pointing to this could be it”. The quarterback moved into fifth place on the NFL’s all-time passing yards list on December 19 and he owns most of Pittsburgh’s franchise passing records, including for completions (5,386), yards (63,721) and touchdowns (416).

Chris Boswell was successful with four field goal attempts to see the Steelers open up a 19-7 lead inside the final six minutes of the contest. Though the Browns made it a five-point game with little over a minute left after Mayfield’s second scoring strike of the day, any hope of a remarkable comeback was soon quashed as Pittsburgh recovered the ensuing onside kick and Harris went off to the races three plays later.

With victory, the Steelers (8-7-1) are guaranteed again to finish the season .500 or above. They’ve still yet to return a losing record in any of head coach Mike Tomlin’s 15 seasons in charge of the team.

In order to make the playoffs, Pittsburgh (8-7-1) must win at the Baltimore Ravens (8-8) – who are also still in the hunt for a postseason berth – on the final Sunday of the regular season, while they also need the Indianapolis Colts (9-7) to lose at the Jacksonville Jaguars (2-14) and hope that the Los Angeles Chargers (9-7) game with the Las Vegas Raiders (9-7) does not end in a tie.

As for the Browns (7-9), they were already eliminated from contention prior to Monday night’s game and their disappointing campaign comes to a close as they host the AFC North division-clinching Cincinnati Bengals (10-6).