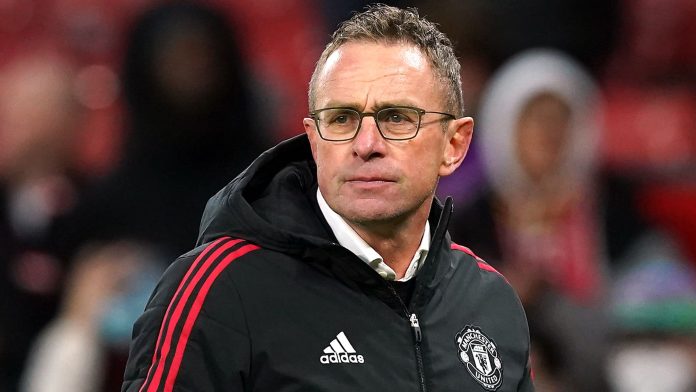 United had been unbeaten under Rangnick since his arrival at the club following the departure of Ole Gunnar Solskjaer, picking up results despite some below-par showings. But they were finally beaten by Bruno Lage’s Wolves on Monday evening thanks to Joao Moutinho’s late goal.

Merson, in his latest column for skysports.com, thinks United now to have re-think their managerial position and act fast if they are to get anything from this season.

My opinion has not changed on Manchester United, and it hasn’t changed from day one. It won’t change either.

They had a plan. They chased Jadon Sancho for who knows how long, they were going to play counter-attacking football with pace and energy, and it all went out of the window when they signed Cristiano Ronaldo.

Now, the football is slow. Ralf Rangnick is playing 4-2-2-2 with two midfield players, who you are asking to get around the pitch and play against four.

In November, Roy Keane and Jamie Carragher did not hold back in the Super Sunday studio after they both disagreed on Cristiano Ronaldo’s role at Manchester United.

To be fair, Scott McTominay has been their best player, but Nemanja Matic can’t get around the pitch anymore. He’s not the player he once was, and against Wolves they just got passed to death.

They got absolutely slaughtered.

You look at the two in midfield for Wolves, Ruben Neves and Joao Moutinho, they ran the show at Old Trafford.

‘It was embarrassing for United’

It was embarrassing for Manchester United. Embarrassing.

Watching the game, I’d go as far as cringeworthy. United had no plan and it was like the players were just going out and doing whatever they wanted. They were playing their own game.

If they’d have played five passes and you get a goal they wouldn’t have scored!

I’ve never really seen anything like it from Manchester United. It’s worrying. This is Man Utd and they got absolutely ripped to shreds against Wolves at Old Trafford.

I know people will say they hit the bar and Jose Sa made a good save, but surely Man Utd should make more than just two chances a game, especially at home.

It’s not good. It really isn’t!

‘United have flattered to deceive’

Ralph Rangnick says that his Manchester United side’s performance was very disappointing following their 1-0 defeat to Wolves at home.

It was really poor, but let’s be honest, look at the games they’ve had. United have won games but they have flattered to deceive.

They went to Norwich and won 1-0 with a Ronaldo penalty, but Norwich should have really got something from the game. Since that game, Norwich have been absolutely rinsed wherever they have been.

They drew with Newcastle and were very lucky to get a draw at St James’ Park. They did beat Burnley 3-1, but how lucky were they in that game? Everyone was saying Man Utd were back, but I thought Burnley were unlucky. They had plenty of chances and with better quality in the final third, they’d have caused problems.

Then United play Wolves and they never looked like scoring. Wolves are good defensively, yes, but United are a million miles off.

Now you need someone to come in and be special. I think Manchester United have been lazy. They have taken the easy option in not appointing a full-time manager.

It’s alright going to a lower club and saying I’m going to do this; these players want to get to there and will listen. These players are there already.

Now you need someone to come in and be special.

I think Manchester United have been lazy. They have taken the easy option in not appointing a full-time manager. This Manchester United. It is the biggest club in the world. Go and do something. Bringing someone in for six months is just lazy.

Talking about what he did at RB Leipzig or what he did at Schalke, they were two clubs down at the bottom. Of course, Leipzig are the club they are now, but it is not like he’s come in with a record of winning a lorryload of stuff.

Then everyone goes on about the pressing. We were pressing in 1989. The great Everton team of the 80s, the great Liverpool teams of the 70s and 80s, they were all pressing. They were all closing people down.

When you watch this United side, you can’t tell me they press.

Moutinho is 35 years old, and he ran the show at Old Trafford. Not one person tackled him in the whole game. I mean, seriously!

‘Something is going on at Old Trafford’

Former Manchester United assistant manager Steve McClaren says he has never seen the side give away possession as often as they did in their 1-0 Premier League defeat to Wolves.

There is something going on at United. I don’t know what it is, that’s not my job, but they need to sort it out lively because this was a huge opportunity.

They need to get top four. They should get top four, but at the moment, it’s not working.

They have had good fixtures and they’ve still got some good ones coming up, but it is not like they have been impressive.

The confidence has completely gone, and I worry for them. They need to sort it out and quick because this was as poor as it gets.

Who next for United? ‘They need to act fast…’

They really missed the boat with Antonio Conte.

When you look at Tottenham now, it was just lazy from united that they didn’t go for him.

Spurs are a completely different team now. He’s come in and he’s spoken, and how can you not listen to a guy like Conte. He’s won the league everywhere he’s been. He comes in and he doesn’t mess about.

On the other hand, Rangnick is at united for just six months. What can he do in that time?

He can’t come in and start ripping it up and telling players they aren’t good enough. The players are thinking that he’s just got six months, they’ll just have a kick around and wait for the new manager in the summer.

They are Manchester United. They are the biggest football club in the world.

A manager is the biggest thing at any football club, and we’ve seen that with Chelsea when they brought in Thomas Tuchel last season. He comes in and they win the Champions League.

It is one of the things I just don’t get with football. It’s all about money, transfers and bringing in players, but nobody ever pays the big bucks to go and get a manager.

If they do, everyone is talking about how much they cost, but if you haven’t got the manager you aren’t winning anything, in my opinion.