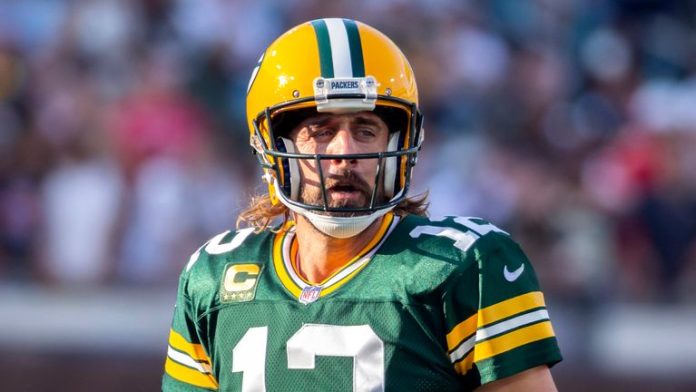 Aaron Rodgers: “His problem is I’m not vaccinated. If he wants to go on a crusade and collude and come up with an extra letter to put on the award just for this season and make it the ‘Most Valuable Vaccinated Player’, then he should do that”

Aaron Rodgers has called NFL Most Valuable Player 2021 award voter Hub Arkush “a bum” after the Chicago sportswriter said he would not vote for the Green Bay Packers quarterback because he is “the biggest jerk in the league”.

Arkush, who is one of 50 Associated Press voters who get to vote for the NFL’s end-of-season award winners, said on Chicago’s 670 The Score radio show: “I think he’s a bad guy. And I don’t think a bad guy can be the Most Valuable Player at the same time.”

“Has he been the most valuable on the field? Yeah, you could make that argument, but I don’t think he is clearly that much more valuable than Jonathan Taylor or Cooper Kupp or maybe even Tom Brady. So from where I sit, the rest of it is why he’s not gonna be my choice.”

Arkush also said on Rodgers’ decision to be unvaccinated, which caused a stir earlier in the season after he’d told the media he was ‘immunised’ against Covid-19: “They’re going to get the No 1 seed anyway, but what if the difference had come down to the [Kansas City] Chiefs game, where he lied about being vaccinated and ended up not playing and they got beat?”

Arkush has since apologised for his comments, saying he made a “big mistake”, as he is not supposed to disclose who he plans to vote for, or not vote for.

Rodgers, speaking on Wednesday in a scheduled news conference, said of Arkush’s initial comments: “I think he’s a bum

“His problem is I’m not vaccinated. If he wants to go on a crusade and collude and come up with an extra letter to put on the award just for this season and make it the ‘Most Valuable Vaccinated Player’, then he should do that.

“But he’s a bum, and I’m not going to waste any time worrying about that stuff.”

Rodgers is a three-time league MVP and is currently the favourite to receiver the honour in back-to-back years after leading his Packers to a 13-3 record and the No 1 seed in the NFC. Rodgers has a 111.1 passer rating on the season, throwing for 3,977 yards, with 35 touchdown passes to only four interceptions.

Rodgers and the Packers travel to the Detroit Lions (2-13-1) this Sunday for the final game of the regular season before having a bye through the first round of the playoffs.

The 2021 league MVP award will be revealed Thursday, February 10 during the NFL Honors ceremony held ahead of the Super Bowl that week.