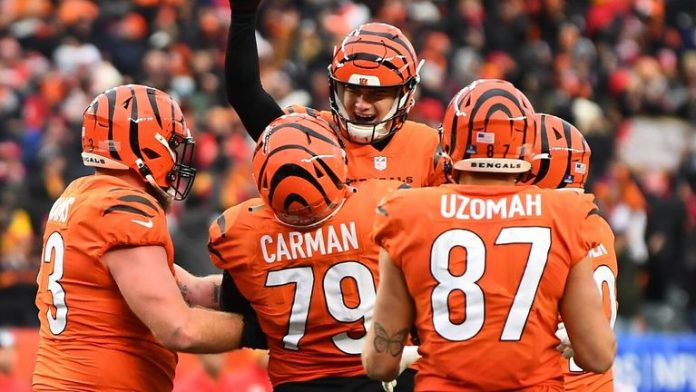 Join Neil and Jeff for a Saturday night double-header of NFL action – Chiefs @ Broncos and Cowboys @ Eagles – live on Sky Sports NFL from 9pm, before the 2021 regular season concludes with the usual NFL triple-header on Sunday from 5pm

As we get set for the final week of the 2021 regular season, Neil Reynolds has opened up a massive nine-point gap over Jeff Reinebold… with the playoffs still to come, there is hope for Jeff yet, but the comeback must start NOW!

As well as hosting Inside The Huddle on Sky Sports NFL every Tuesday at 9pm, Neil and Jeff release a weekly audio edition of ITH every Wednesday in which they make their game picks.

Neil scored 12 to Jeff’s 11 in Week 17 to open up a 167-158 advantage on the year, as he correctly called the Tennessee Titans victory over the Miami Dolphins that helped clinch them the AFC South division crown and reclaim the No 1 seed in the conference.

Click on the link below to listen to this week’s ITH podcast, and read on to see Neil and Jeff’s Week 18 predictions…

“I think the Chiefs – although defeat to the Bengals last week was a disappointment, especially defensively – get back on track here against Denver.

“And this could be the end of Vic Fangio as head coach of the Broncos. It’s now six-straight losing seasons for that franchise since they won Super Bowl 50.”

“It looks like Philly are going to rest some starters. They’re locked into their playoff position in the NFC – so I’m going with Dallas on the road.”

“Yeh, I’m picking Dallas too. Although I was really disappointed with the first half the Cowboys had last week against Arizona, offensively in particular – they looked disinterested.

“Indy need to win to get in and I think they get the job done. Jacksonville have been a ‘get right’ game for virtually everyone on their slate.”

“Fifty. FIFTY! That’s all I’m saying. The Jags gave up 50 points to the Patriots last week!”

“The 49ers match up well against the Rams, winning the last five straight, including in Week 10 where they beat them 31-10, running the ball 44 times that day!

“But I think this is dangerous for San Francisco, as I have them losing here to the Rams and being edged out of the playoffs by New Orleans (if they beat Atlanta).

“I’m a bit worried about Matthew Stafford’s tendency to turn the football over at the moment – especially come playoff time – but I’m backing him to get the win here.”

“I’m jumping on the 49er bandwagon here and say they’ll continue to run the ball on the Rams with success.”

“This is a win-and-you’re-in game, the last game of the regular season.

“The Raiders have won three in a row to get back in this, but I like Justin Herbert to get the Chargers the win on the road that sees them sneak into the playoffs.”

“You’ve got to go some to find a guy who has done a better job, in a really difficult situation, than Rich Bisaccia since he has taken over as interim coach.

“But I’m still taking the Chargers. As if I back the Raiders, I know they’ll lose.”

EHC ROUND 3: MONTENEGRIN JAKSIC TAKES THE LEAD IN CATEGORY 1