Home Sport Smith leads, Rahm has edge in battle for No. 1 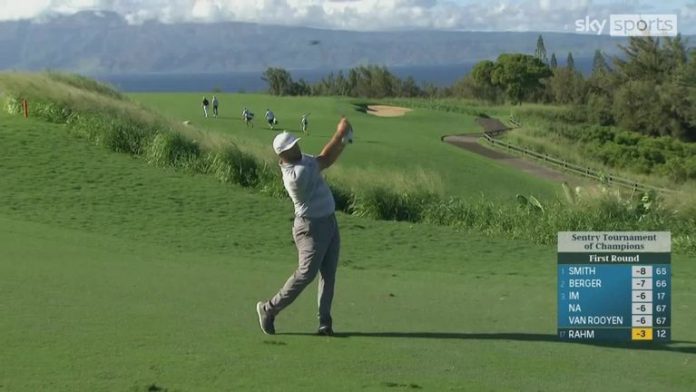 Australian Smith shot an eight-under-par 65 to lead after the first round of the Sentry Tournament of Champions in Hawaii; Jon Rahm is one shot behind and has the edge over Colin Morikawa in the battle for the No 1 spot in the Official World Golf Rankings

Cameron Smith carded a pair of eagles on route to an eight-under-par 65 on Thursday to claim a one-shot lead after the first round of the Sentry Tournament of Champions in Hawaii.

The Australian’s solo lead held up when reigning FedEx Cup champion Patrick Cantlay was unable to get up-and-down for birdie on the closing par-five 18th hole. Cantlay settled for par and is tied with world No 1 Jon Rahm and Daniel Berger at seven under. Another shot off the pace are Kevin Na, Sung-jae Im and Erik van Rooyen.

Smith bogeyed the second hole at Kapalua before getting his round going with a birdie on the following hole. He reached the par-five fifth hole in two shots and sank his first eagle putt of the day from 44 feet.

Leaderboard after the first round @Sentry_TOC:

He was three under when he reached the par-four 13th and reeled off a pair of birdies, followed by draining a 37-foot eagle putt on the par-five 15th. Another birdie on the 16th made Smith five under over a four-hole stretch, parring his final two holes.

“I just needed those two eagles to get a really low one happening,” Smith, who anticipates he will need to keep up that pace on a course where the winning score has been 20 under or better in 10 of the previous 13 events, said. “Obviously two really long putts and probably quite fortunate that they went in, but they went in.

“The course is really receptive; it’s going to be low-scoring all week unless the wind gets up. I don’t think that’s meant to be the case, so it will probably take something, maybe three more of those [low rounds] to get the job done.”

it will probably take something, maybe three more of those [low rounds] to get the job done.

Smith entered the week 21st in the OWGR and qualified for the event for the first time courtesy of his win with compatriot Marc Leishman at the Zurich Classic. He played three times during the fall swing, but has not teed it up since tying for fourth at The RSM Classic in November.

Meanwhile, Rahm started off well in his effort to hold off Collin Morikawa for the top spot in the Official World Golf Ranking for at least another week.

The Spaniard reeled off three consecutive birdies on the front nine and then four more over his final six holes in posting a bogey-free round.

Rahm is guaranteed of remaining No. 1 if he finishes first or second, but Morikawa is only two shots behind at five under.

“Not that I’m surprised that I played good, but it’s really good to come out and start the year off the right way,” Rahm said.

Elsewhere, two-time event champion Justin Thomas is tied for last in the 38-player field at one over with 2015 winner Patrick Reed. Meanwhile, 2016 champion Jordan Spieth is six shots off the lead at two under along with Phil Mickelson, who is playing in the event for the first time in 21 years.

Defending champion Harris English scuffled to an even-par 73 as he attempts to become the first player to successfully defend his title at the event since Geoff Ogilvy in 2009/10.

The US Military Is Building Its Own Metaverse