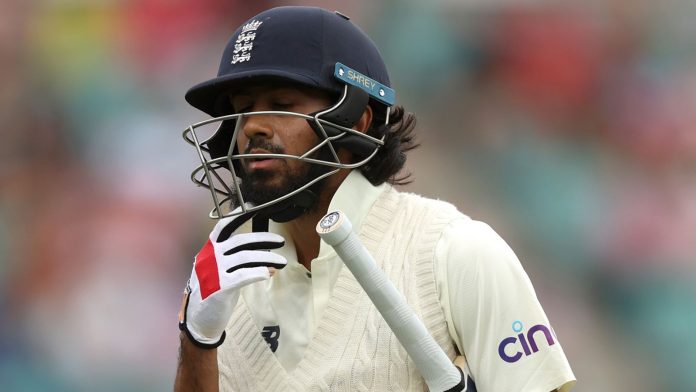 England suffer more wince-inducing top-order trouble; Haseeb Hameed has the worst average of any England batter to play at least seven innings in a Test series; England’s average opening partnership in this Ashes is a lowly 9.57 and lasts an average of only 4.1 overs

Jonny Bairstow, Ben Stokes and Mark Wood ensured England came back fighting on day three of the fourth Ashes Test – after the tourists had endured a quite dreadful start.

Top-order woes have been par for the course and the stats are alarming.

Hameed, who was dropped by Australia wicketkeeper Alex Carey before he was bowled by Mitchell Starc, is averaging 10.14 in this series – a new low.

Never before has an England batter who has played at least seven innings in a series recorded a worse average than Hameed, who since scoring 25 and 27 in the series opener in Brisbane has gone on to make totals of six, nought, nought, seven and six.

Hameed has been involved in each of England’s seven opening partnerships in this series and his stand of 22 with Crawley in the first innings at Sydney was the longest of them – at only 9.2 overs!

England lost their first wicket to the first ball of the series in Brisbane – the now-axed Rory Burns bowled by Starc – and then in the ninth over in their second innings.

In Adelaide, Burns was banished in the third over in the first innings, before Hameed fell in the second over second time around. At the MCG, England were one down inside two and five overs respectively.

England’s average would have been even worse if Starc had not overstepped on day two after having Crawley caught at slip before he could score a run, or had Hameed not been dropped early on day two by Carey.

Before Australia get too cocky, they have the second-worst, averaging only 8.50 for the opening partnership during the 2019 Ashes in England.

England’s 70-ball run-less streak was not quite a record in their Test history, with the side having gone 79 balls against India in Chennai in 1964 and 77 balls against West Indies in 1950 without impacting the scoreboard.

The record for any team is owned by Australia, who went 154 successive scoreless deliveries, faced by Peter Nevill and Steve O’Keeffe, against Sri Lanka at Kandy in 2016.

Root was England’s – and world Test cricket’s – standout batter in 2021, amassing more runs than anyone else and 1,178 more than any of his team-mates as he totalled 1,708 runs.

However, he still has the unwanted personal record of never having scored a Test century in Australia and bagged his second duck of this series when he snicked Scott Boland behind in Sydney.

He is now up to five Ashes ducks as captain, matching the number bagged by the great Sir Donald Bradman.

Of course, England’s batting woes are not limited to the top order with Jos Buttler’s duck meaning he is now averaging 17.07 across his last eight Tests with a top-score of 39.

In better news for England, they managed to almost treble their tally of sixes across the first three Tests in just one afternoon.

England managed four maximums combined during the Brisbane, Adelaide and Melbourne Tests but hit seven alone in Sydney on day three, with Bairstow and Stokes finding the stands four times in the space of 36 minutes before Wood added three more later in the day.

Do any of those three want to open the batting? If not, what about the guy mentioned below…

The Chris Woakes to open the batting dream is inching closer