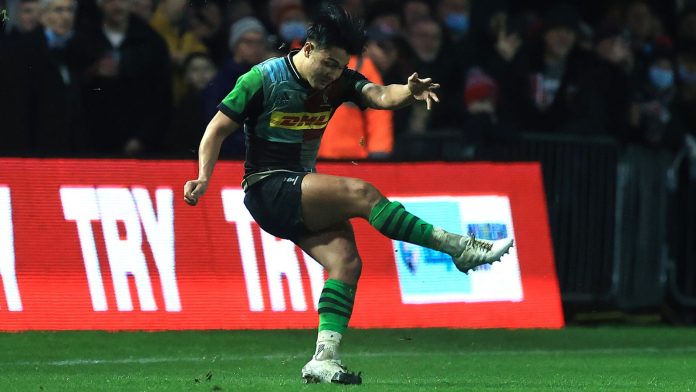 Locked a seven points apiece at half-time, the home side played the second half with a man-advantage after Chiefs’ Alec Hepburn was sent off in the final stages of the first half following a dangerous clear-out on Joe Marler.

After Jack Innard had put Chiefs ahead, Andre Esterhuizen provided the route back for Harlequins.

Esterhuizen used his pace to get on the end of a pinpoint cross-field kick from Smith in the 79th minute. The England international fly-half then showed his accuracy off the tee to secure the match.

The thrilling afternoon between last year’s Premiership finalists began with Exeter’s defence being shredded by a sparkling run from Joe Marchant.

Although he had the ball ripped away by Stuart Hogg, Luke Northmore was able to stab ahead and touch down for the first try of the contest, with fewer than five minutes played.

Danny Care was at the heart of proceedings when Harlequins probed for a second try soon after. He sent Jack Kenningham through a gap, only to spill a tricky return pass on approach to the line a phase later.

Tighthead prop Will Collier was celebrating his 200th appearance for the champions and he was part of a vintage scrummaging display which had the Exeter struggling to establish a foothold in the game.

😲 What a game, what a performance, what a milestone.

The only downside to Harlequins’ dominant opening was their failure to register more points. Meanwhile, the Exeter’s ability to never give up paid dividends and after 35 minutes, they had a try of their own.

Joe Simmonds flicked the ball up to Henry Slade, deceiving the defence who were joining the ruck, and the England centre used his gas on a looping run to cross in the corner.

Exeter finished the first half on top, but their prospects of leaving the capital with a fifth successive away win were hindered when Hepburn was sent off. Marler, thankfully, was unhurt by the dangerous clear-out performed by Hepburn and Sam Simmonds.

Gallagher Premiership – Round 13 fixtures and results

With a man-advantage, Harlequins were initially unable to build on the half-time score of 7-7. Instead, they blew a series of chances in the third quarter, albeit in conditions made treacherous by heavy rain.

As Harlequins struggled to score, Exeter were rewarded for staying in the fight, and replacement hooker Innard’s first try of the Premiership season on 65 minutes, put them ahead.

For 10 minutes, it looked to be enough to secure a gutsy away win, but Exeter’s defensive-line cracked during a late assault from their hosts.

Esterhuizen got on the end of a stunning cross-field kick, a tactic that Smith had been performing well, and the former South Africa centre slide over the line to lock the game at 12-12.

Smith, undaunted by the weather conditions and a wide conversion attempt, stepped up to the mark. He connected well with the ball and after bouncing off the right-hand upright, it sailed through and The Stoop erupted.

Away wins for Northampton and Gloucester

The Saints crossed for five tries during their 44-8 triumph at Kingston Park, as their attacking flair was too much for the Falcons to handle.

Tom Collins, Courtnall Skosan, Sam Matavesi, George Furbank and Tom James all got on the board, and the result moves them up to fifth the Premiership table, three points off the top four.

In North London, Gloucester held on for their first victory at Saracens in nine attempts and prevailed 25-24 over their hosts.

Saracens had a chance to win it, however unlike Smith at The Stoop, Alex Lozowski was unable to secure a touchline conversion with two minutes remaining.

Saracens had held a nine-point cushion at one point, after the Cherry and Whites lost two men to the sin-bin in the first half. However, Mark McCall’s men ultimately had to console themselves with a try-scoring and a losing bonus-point only.

The US Military Is Building Its Own Metaverse