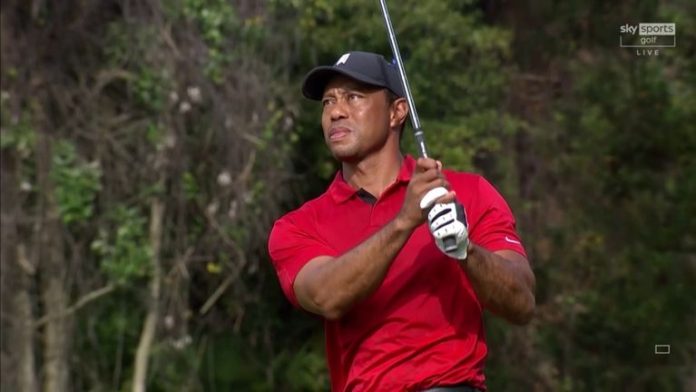 Woods has ruled out a full-time return to golf following his comeback at the PNC Championship last month, but intends to appear in certain events; watch the Sony Open live from Hawaii on Sky Sports Golf from 5pm on Thursday

When Tiger Woods returned to action alongside his 15-year-old son Charlie in December’s PNC Championship, nearly 11 months after the horrific car accident in which he suffered multiple leg injuries and underwent multiple surgeries, it was a moment which gave much cheer to golf fans around the world.

The 46-year-old’s appearance at the tournament in Orlando has proven, for now at least, to be a one-off. Yet while Woods himself has stated he has no intention of returning to the PGA Tour on a full-time basis, he has not ruled out playing in certain events in the future.

“I’m just so thankful to be able to have this opportunity to do it again,” Tiger said after finishing second at the PNC Championship with his son. – TGRhttps://t.co/ABh3VkwmbO

“I’m not going to play a full schedule ever again,” Woods said at the time. “I’m going to have to pick and choose what events, and even then, my body might not cooperate with that.

“I don’t know how many events I’m going to be playing in – and it’s going to be up to training sessions, practice sessions, recovery tactics, all those different things to be able to do it.”

Even given the less-than-serious nature of the father-son event, in which the Woods’ finished runners-up to former PGA Championship and Open Championship winner John Daly and his son John Daly II, Tiger still showed glimpses of the ability which has taken him to 15 major titles in his career.

Having to use a buggy instead of being able to walk the Ritz-Carlton course was a sign the man who has long been an icon of his sport still has a long way to go in his rehabilitation from that crash on the California coast, the progress of which will likely determine his next appearance.

Nevertheless, two-time major winner Mark O’Meara underlined just how much of a huge step it was for Woods to return to competing even in an exhibition event such as the PNC and the World Golf Hall of Fame member expects to see his close friend again defy expectations by playing again.

“It’s a big feat for him just to come back and play the PNC and who knows where he goes from here,” O’Meara told The Golf Channel. “But, knowing the competitive nature that burns inside Tiger Woods, I wouldn’t be surprised to see him play again on the PGA Tour.

“I think he’s in a pretty good place. I hope and pray that’s the case. I don’t know if he comes back and plays like he has in the past after what happened in February, but you can never underestimate this young man.

“I know he’s not a young man anymore, but every time everyone of us have thought ‘well, maybe it’s not going to happen’, it does.”

Another who expects Woods to be back in action sooner rather than later is Sky Sports golf expert Rob Lee, who was heartened by seeing both Woods’ performance and the interaction with his son at the PNC Championship.

“What was incredible to me is his relationship with his son and the golf that he produced when he has hardly played much,” two-time European Tour tournament winner Lee told Sky Sports News last week.

“Tiger is swinging the club really well; he just needs the body to move him around the golf course four times a week.

“I think we’ll see him on the golf course at some point this year – it will be amazing.”

‘Fairy tale comeback for Tiger, but what next?’

Rob Lee looks back at an impressive return to action at the PNC Championship for Tiger Woods and debates about how far he is away from a major comeback.

Lee has previously drawn comparisons between Woods’ return and that of another golfing icon, Ben Hogan, who also nearly had his career curtailed by a car accident in 1949 which left him with multiple broken bones and near-fatal blood clots. But four years later, he went on to complete what remains one of the greatest individual seasons in golf history which saw him win the Masters, US Open and Open Championship.

The nine-time major winner was, however, 10 years younger than Woods at the time of his accident and another close confidant, former Ryder Cup USA team member John Cook, is more cautious about the current-day great’s prospects – at least as far as the rest of this year goes.

“I think the next time we see him will be at the [2022] PNC Championship,” Cook told The Golf Channel.

“I don’t think his body will be physically ready. He can’t train the way he’s going to want to train.

“He’s never been a ‘show up’ guy if his game isn’t ready for prime time, but I see it happening at some point otherwise he wouldn’t be testing a ball, shaping shots on the practice tee, working on a new driver that he likes. I think there’s a motive to that.”

In any case, it would seem unlikely Woods would be back to fitness in time for the Masters in just under three months – as a former champion, he automatically receives an invitation – and a tilt at equalling Jack Nicklaus’ record of six titles at Augusta National this year.

The man himself has, however, hinted at aiming for an appearance at the Open Championship in July, a tournament he has won three times and which is being held at St Andrews – the iconic venue two of those triumphs have come – to celebrate the event’s 150th edition.

“I would love to play at St Andrews, there’s no doubt about it,” Woods said. “It is my favourite golf course in the world, to be a two-time Open champion there – just even being part of the champions dinner is really neat.

“It’s just an honour to be a part of a room like that and, yes, I would love to be able to play that Open Championship there is no doubt about it.