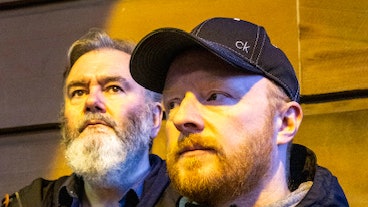 Arab Strap have shared a new song called “Aphelion.” It’s the A-side of a 7″ single b/w “Flutter,” due out March 4 via Rock Action. Both songs are remnants of the Scottish outfit’s studio sessions for their 2021 LP As Days Get Dark. “Aphelion” is available to stream now; check it out below.

In a statement, Arab Strap’s Aidan Moffat said of the 7″:

“These two songs were written, recorded and mixed during the sessions for As Days Get Dark but as much as we loved them, we couldn’t find a place for them on the final album. Maybe it’s because they seem to have their own distinct identities, but sometimes a song just sounds better on its own, when it’s not part of a crowd and vying for attention. So, to celebrate the anniversary of the album’s release, we present As Days Get Dark’s two runaway loners; a couple of black sheep who might not click with the rest of the family but, even though they aren’t very happy, are still worth a cuddle.”

Moffat and Malcolm Middleton broke up Arap Strap after the release of their 2005 LP The Last Romance, before reuniting in 2016 to tour. The songs on As Days Get Dark comprised Arab Strap’s first new music since their reunion. They reissued their 1996 debut The Week Never Starts Round Here in 2010 and again in 2019.