Home Culture ‘After Life’ brings the bittersweet Ricky Gervais comedy about grief to an... 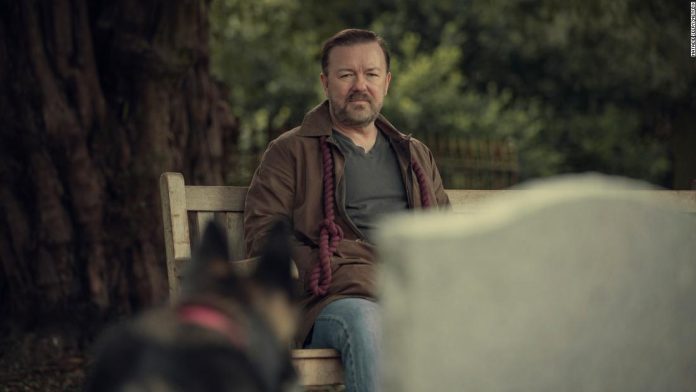 Gervais’ wrinkle is to punctuate the serious nature of the protagonist’s plight — trapped as he is in an endless loop mourning the death of his wife, watching old videos as he clings to those memories — with extremely broad comedy of a very hit-miss variety. As a human-interest reporter for the local paper, his character Tony encounters all sorts of eccentric folks, listening to their odd stories until he can take no more, at which point he cues his photographer (Tony Way) to “Take a picture” and beats a strategic retreat.
The time Tony spends learning about other people’s lives obscures his inability to find peace within his own, having put himself at arm’s distance from Emma (Ashley Jensen), the nurse he met while she tended to his late father, who initially seemed to be an obvious bridge to lead him back to embrace living.
The questions surrounding that relationship, and what direction it will take, are again prominent in season three, but no more so than Tony’s interactions with his brother-in-law Matt (Tom Basden), one of Tony’s few lifelines to the world, who understandably laments his tendency to lash out at those around him.
The third season (Gervais’ previous shows have quit at two) doesn’t exactly build toward a conclusion, but the six-episode arc does finally reach one, which should be enough incentive for Gervais completists to binge the run. That said, “After Life” still feels like one of Gervais’ less accomplished solo efforts, in part because of the natural constraints that a comedy so immersed in sadness must labor to overcome.
Gervais compensates for that by being just plain quirky, particularly in the network of supporting players. In a way, though, the show’s most satisfying relationship becomes the comfort Tony finds interacting with his dog, who should really qualify for some sort of special canine Emmy.
In keeping with Gervais’ well-documented reputation as a provocateur, “After Life” admirably refused to settle for greeting-card answers to the question of surviving loss. But in the final analysis, the show never wholly advanced beyond the initial appeal of its premise.
And with that, as Tony would say, take a picture.
“After Life” begins its third and final season Jan. 14 on Netflix.