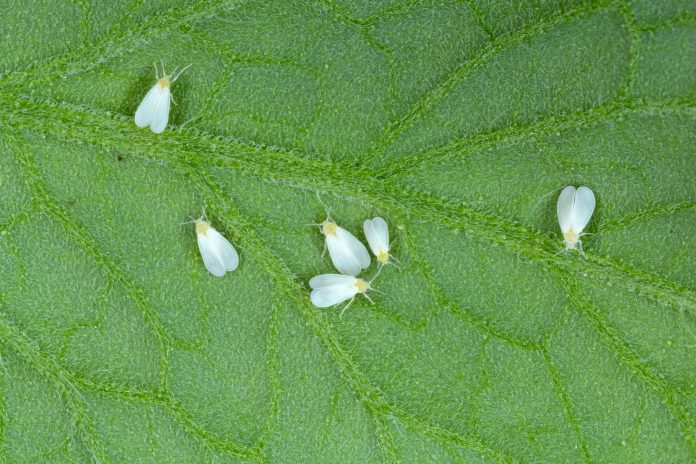 This article appeared in the January/February 2022 issue of Discover magazine as “Mind the Gap.” Become a subscriber for unlimited access to our archive.

Tens of millions of years ago, a tiny, milky-white bug known as a whitefly snatched a gene from its host, an ancient plant. Dubbed BtPMaT1, the gene renders a common plant toxin harmless — allowing the pesky insect to become one of today’s most insidious agricultural pests.

The discovery of BtPMaT1 in whiteflies marks the first time scientists have identified a gene that’s crossed from a plant to an animal, researchers from China and Europe reported in Cell last March. Horizontal gene transfer, or HGT, occurs when a gene moves from one species into another. It’s common between many species of bacteria, and even occurs between bacteria and plants, or bacteria and animals. Finding a gene from a plant inside an insect, though, was unprecedented.

The stolen gene helps explain why whiteflies are so good at chowing down on crops. It allows the sap-sucking insects to detoxify phenolic glycoside — chemicals that some plants produce as a defense mechanism — in their food. When the researchers disabled the gene and let the whiteflies munch on tomato plants, nearly all of the insects died. That makes the gene a powerful target for potential pest control applications, says study co-author Ted Turlings, a chemical ecologist at Switzerland’s University of Neuchatel.

Its recent discovery aside, BtPMaT1 has called the insect home for quite some time. The gene was likely transferred between 35 million and 80 million years ago by a virus, says Turlings. Yet the original plant species remains a mystery.

But HGT between plants and animals probably happens far more often than we think, says Nicky Wybouw, a molecular evolutionary biologist at Ghent University in Belgium. What’s much rarer is when the gene actually proves useful and becomes integrated into an entire population, as it did in whiteflies.

The gene’s clear advantage likely explains its lingering presence. And future research may soon reveal that plant-insect HGT isn’t actually so rare: Turlings says his co-authors have already found another gene in whiteflies that likely originated in plants. “I do think it’s actually very common,” he adds.