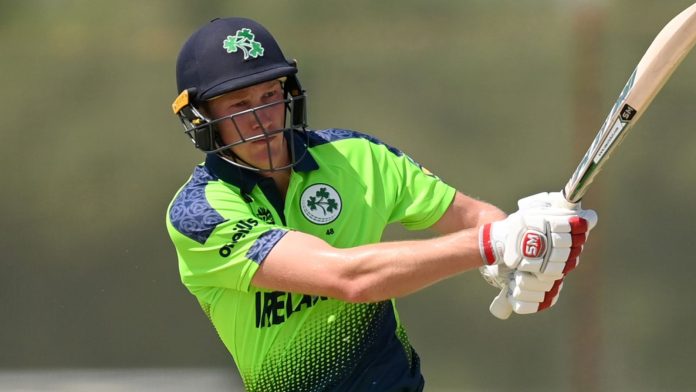 Ireland beat West Indies by five wickets on DLS in second one-day international; Harry Tector top-scores with 54 not out after stand-in skipper Paul Stirling becomes first Irish batter to score 5,000 runs in ODIs; series decider to be held at Sabina Park on Sunday

Ireland shrugged off a number of Covid absences to beat West Indies by five wickets on DLS in a rain-affected second ODI and set up a series-decider.

Ireland, whose captain Andy Balbirnie was one of four players ruled out due to coronavirus, dismissed West Indies for 229 in 48 overs after winning the toss in Jamaica, with spinner Andy McBrine’s four wickets including home captain Kieron Pollard for one.

The tourists reached 157-4 after 31.2 overs in reply before a rain break and were then set a revised 168 from 36 overs to win, meaning they required 11 more runs from 28 deliveries.

Ireland clinched victory in the 33rd over, with Harry Tector ending 54 not out – the 22-year-old completing back-to-back half-centuries having hit 53 in the series opener – after Paul Stirling (21) became the Irish batter to score 5,000 ODI runs.

Ireland bounced back from their 24 run defeat in the first ODI at the same venue and will now be looking to complete a series win in Sunday’s third and final fixture at Sabina Park.

The second ODI was delayed by two days due to coronavirus cases in the Ireland camp, with Balbirnie, Lorcan Tucker, Simi Singh and Ben White subsequently missing Wednesday’s match.

Stirling – who missed the first ODI after testing positive for Covid during Ireland’s recent series against the USA in Florida – led Ireland in Balbirnie’s absence and saw his side reduce West Indies to 143-8 inside 40 overs.

Shamarh Brooks followed his hundred in the first ODI with 43 from the No 4 spot, while West Indies No 9 Romario Shepherd (50 off 41) and No 10 Odean Smith (46no off 19) then rallied the home side with a ninth-wicket stand of 58.

Tector top-scored in Ireland’s reply but each of the top five made double figures, including McBrine (35) and William Porterfield (26).