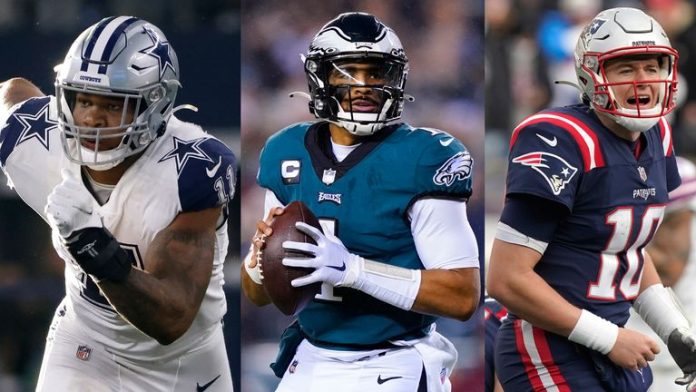 The Fantasy Football season may be over, but Sky Sports‘ expert Hannah Wilkes is still here to showcase the very best talent you can watch out for in the NFL playoffs, starting with a look at the young stars looking to impress on Super Wild Card Weekend…

It may be cold, dark and miserable outside, we may all be struggling with just how ridiculously long the gap is between December and January paydays, we may have already fallen off our various New Year’s resolution bandwagons (if we even started) but fear not folks, the one redeeming feature of the first month of the year has arrived: it’s playoff time.

‘The Tournament’ where seasons essentially start and end, NFL legends are written and hearts are inevitably broken for the 13 teams who get close, but not quite close enough. Three nights of football kick us off on Super Wild Card Weekend concluding with the first Monday Night playoff game in NFL history.

There is, quite simply, nothing like playoff football and as we look at the match ups for this weekend one of the things that excites me most is the breadth of young NFL talent on show.

Sure, Tom Brady is chasing his eighth championship and has more postseason starts than the other 11 quarterbacks playing in Wild Card weekend combined (45 for Tom, 44 for everyone else) and the Ben Roethlisberger retirement tour is still rolling, but across the bracket there are rookie, sophomore and young players ready to lead their teams (hopefully) all the way to the big dance in LA in five weeks’ time…

In his sophomore season Joe Burrow took Cincinnati from worst to first in the AFC North having missed the last six weeks of his rookie season with an ACL injury. He comes in hot for his playoff debut opposite Derek Carr for the Raiders who has waited eight years as a starter to enter the tournament.

Burrow led the NFL in completion percentage and pass yards per attempt in 2021, with only Aaron Rodgers having a higher passer rating. I urge you to read that again and let it sink in. His success this year has a lot to do with the Bengals’ first-round draft pick in 2021; his former college team-mate Ja’Marr Chase.

The rookie wide receiver racked up a cool 1455 receiving yards in 2021 (the most by a rookie in the Super Bowl era) from just 81 receptions resulting in 13 touchdowns. The Burrow-Chase connection is joyful to watch but it’s by no means a two-man band in Ohio. The Bengal’s WR trio of Chase, Tee Higgins and Tyler Boyd each has over 800 receiving yards and five touchdowns through 2021 so if the Raiders defense successfully contains Chase, like they did in their week 11 match up, Burrow still has options through the air.

The Raiders are not short of young stars either with defensive end Maxx Crosby picking up a defensive player of the week award for his performance against the Chargers last Sunday night. He ended the season with eight sacks, 13 tackles for loss and 30 quarterback hits. The notoriously flimsy Bengals’ offensive line will face a real challenge protecting Burrow from Crosby and the Raiders pass rush.

Remember when everyone thought the Patriots would be in for a long rebuild post-Brady? Hilarious. Bill Belichick got what looks to be his guy in the 2021 draft and has made it back to the playoffs after a one-year absence with rookie QB Mac Jones, who becomes the first newbie to start a playoff game in Patriots history…no pressure then.

This is how we got here. pic.twitter.com/deEmVm1CLp

It’s not been perfect by any means, but on the whole it’s fair to say Jones has played beyond expectations and has heralded “Tom Brady circa 2002” comparisons at times with his similar shape and style. He did have something of a December “wobble” to remind us he is still new to this with New England losing three of their last four games, having won seven straight before the bye.

My gut (and Super Bowl Challenge bracket) have the Bills taking this one but only a fool completely overlooks any team run by Belichick. That said, even if Jones goes the way of most rookie QBs in the playoffs (2-8 as starters since 2010) the future is bright in New England. Again.

Jalen Hurts is about to take on an opposing QB 21 years older than him, and become the youngest quarterback in Eagles history to start a playoff game. Age differences are always a talking point when it’s Tom Brady in the opposing corner (because he is significantly older than the majority of QBs in the league and may in fact be Benjamin Button-ing right before our very eyes) but it bears out most clearly in the opposing styles of these to guys under centre; Brady throws the ball, Hurts runs it.

The Buccanneers have the number one passing offense in the league, the Eagles the number one rushing outfit. Jalen Hurts has rushed a full 703 more yards than Brady through the 2021 season. Hurts leads QBs in rush attempts, total yards and touchdowns, Brady the same in passing.

Earlier this season Bruce Arians said he did not care how good your run game was, he was confident the Buccs defense could stop it. However, they are a little beat up right now and in their match ups against top-five rush offenses this season Tampa have only won by a score, which in playoff football especially gives Eagles fans plenty of reason to hope…if their defense can somehow contain Brady

I got into a little bit of trouble with coach Jeff Reinebold on Overtime this week by saying for “older” NFL fans this is the juiciest Super Wild Card Weekend match up of the bunch. In the 80s and 90s the Niners v Cowboys rivalry, particularly in NFC Championship games was unmatched. I’m sorry coach, but it’s been 26 years since these guys met in the post-season, and 40 since “The Catch” so it’s entirely fresh in the memory of all fans born post-1980…and therefore literally every player in the league.

So who will produce some magic to add to the folklore of this rivalry? Deebo Samuel? Possibly. Dak Prescott and the Cowboys number one offense? Probably. But my money is on Micah Parsons stealing the show.

The rookie lineback has been, frankly, sublime. 13 sacks, 84 tackles, three forced fumbles, and top five in the league in terms of pressure rate and pass-rush win rate this season. He is relentless and, with him up front and Trevon Diggs picking off balls for fun in the secondary, the Dallas defense is where we could see some of the biggest game-changing moments in this match up.

It is no secret the Steelers snuck into the Wild Card spot thanks to the Colts laying a ginormous egg against the Jaguars and the Raiders beating the Chargers in over time. But they made it and in an AFC where literally nothing makes sense, there is still the possibility that anything could happen come Sunday night…maybe.

In what has been a faltering offense (23rd total) the bright spark for the Steelers has to be running back Najee Harris. The rookie ended the regular season fourth in the league with 1200 rush yards, and only behind Jonathan Taylor in yards from scrimmage. Against a Chiefs defense that, while improved overall, is still shaky against the run and alongside a quarterback who is ‘limited’ in terms of stretching the field, any chance the Steelers have of causing an upset at Kansas City has to start with Harris.

It’s also a playoff debut for Kyler Murray (so that’s three firsts really, great maths from me) who started the season as an MVP contender with a 7-0 record, got hurt, had his team slide to 1-4 through their last five games to finish second in the NFC West. However, the fifth seed may yet be an advantage for Kliff Kingsbury’s boys as they finished the season 8-1 on the road and convincingly beat the Rams at SoFi all the way back in week 4.

There are always concerns when a team played best in September and October as to whether it can recapture the magic in January, but Murray comes into this one with a point to prove having waited three years for a chance to compete in knock out football. Despite the continued absence of DeAndre Hopkins through injury, Murray has shown what he is capable of in recent weeks with a win over Dallas, and with some big plays in the loss to Seattle in week 18.

With the Rams, and Matthew Stafford, consistently inconsistent through 2021, and these two teams being 1-1 in their regular-season contests, it makes for an intriguing finale to a bumper weekend of football.