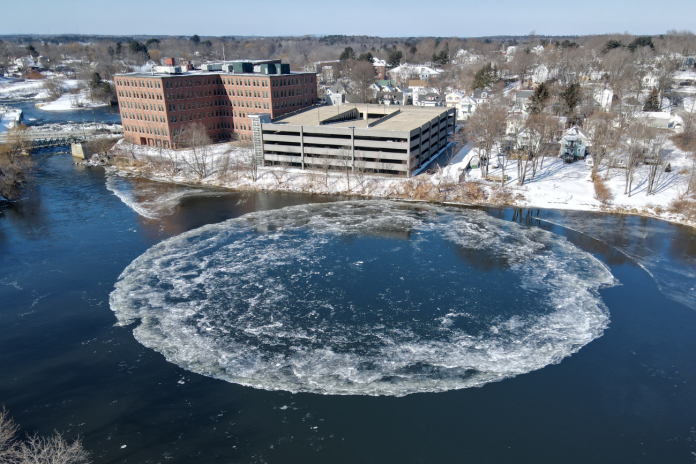 When temperatures plummet along the Presumpscot River in Westbrook, Maine, conditions are right for a breathtaking natural phenomenon: a large disk of ice on the river, rotating in slow circles. “Apparently it just formed yesterday in a cold snap,” says Caran-Marie Michel, one of the first to spot the ice disk after it appeared on January 11. “No one’s really sure how long it will last, so people are flocking to see it while it’s here. It’s like a festival.”

The ice disk is the long-anticipated sequel of a first spinning ice disk that formed under similarly frigid conditions in January of 2019. Its predecessor was about 100 yards in diameter and rotated counterclockwise on the river for two weeks — delighting “disk-peepers” and gaining media attention from as far away as England.

This year’s is a similar size, but appears thinner. It spun carefree for a day before freezing fast to the surrounding ice in low temperatures overnight. Curious crowds can still make out the shape of a circle, though, reminiscent of a full moon surrounded by clouds.

Surprisingly, the Westbrook ice disk isn’t the first of its kind. One of the earliest recordings of the rare phenomenon can be found in an 1895 issue of Scientific American, in which a reader wrote to report “a curious ice formation” about 25 to 35 feet wide revolving on the Mianus River in New York. Yet another well-known ice disk, which stuck around for months, formed on the Pite River in Sweden in 1987 and again in 1994.

In 2016, a team of researchers from the University of Liege in Belgium investigated the mysterious rotation of such ice disks. They found that the icy visitors self-propel in warm water; as the ice melts, the cold water sinks and creates a vortex that causes the disk to spin.

But there’s a difference between how ice disks rotate in laboratory studies and how they rotate in nature, explains Paul Nakroshis, a physics professor at the University of Southern Maine: “That’s not what’s happening in the river situation.” In nature, ice disks aren’t surrounded by warm water. It’s the river’s current that causes the spinning motion.

According to Nakroshis, when temperatures dip during the winter, the river begins to freeze along the shores. Then, spurred on by the stronger current toward the middle of the river, ice chunks break off. “When you get two chunks of ice next to each other,” he says, “the water between them freezes.” In other words, small ice chunks fuse together to form large ice chunks — the same way ice cubes eventually freeze together while floating in your glass of water.

Wondering how the disk achieved its perfectly circular shape? Once there’s an exceptionally large chunk of ice in the river, the current pushes it into rotation. “When it runs into the shore, it shaves corners off and you get a nice circle,” Nakroshis says. “It’s not a mysterious process. These disks form in rivers all the time, all over the place where it’s cold enough.”

A Bit of Magic

However, he notes that what makes the Westbrook ice disk so unique is the sheer size of it: “This one’s particularly big. It’s pretty cool to see a large disk of ice. It’s an interesting natural phenomenon.”

And it’s even more interesting that it happened more than once.

“It’s a historic event, the ice disk,” says local resident Ainsel Ponti, who appreciates not only the science but also the ephemeral beauty of the experience. “I froze to death, but also had a childlike glee just looking at it. It’s just a delight; it’s a little bit of magic.”

Part of the appeal is the unpredictable nature of it. “This could be gone in a couple of days,” Ponti says. But while the giant ice disk remains on the river for now, she adds, “it kind of brings people together in a really fun way, which I fully support, now more than ever.”

The 20 Best Streetwear Brands to Know Now and Wear Forever