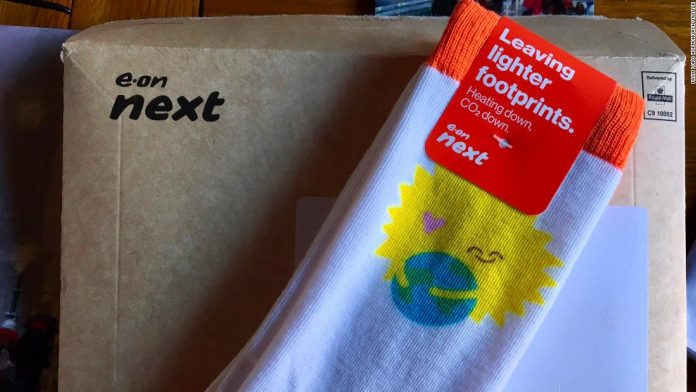 E.ON Next sent socks to about 30,000 households with a tag attached to them that said lowering their heat would reduce CO2. The households had taken part in an “energy saving campaign” last year, The Guardian reported.
The sock’s messaging couldn’t have come at a worse time — U.K. households are facing skyrocketing energy bills because of a combination of cold weather, nuclear plant outages in France and reduced gas flow from Russia. British consumers will pay roughly £790 ($1,075) more this year to heat and light their homes, according to Bank of America.
The energy company posted an apology on Twitter, saying they are “incredibly sorry.” CNN Business has reached out to E.ON Next for comment.
“If you recently received a pair of socks from us, we would like to say we are incredibly sorry for how we have made some people feel,” the tweet said. “In light of the seriousness of current challenges that many people are facing, this mailing should have been stopped and we are sorry.”
Customers took to Twitter to lambaste the company.
“I don’t want your cheap nasty free socks I want cheaper utility bills please,” one user tweeted.
“Seriously, energy prices are going up,” another user tweeted. “…What the bloody hell.”
Earlier this week, the main opposition Labour Party called on Prime Minister Boris Johnson to impose a windfall tax on companies pumping oil and gas from the North Sea. The party claimed the tax could reduce the average energy bill by about £200 ($272).
Another major energy supplier, OVO Energy-owned SSE, faced backlash earlier this week after it sent an email to customers encouraging them to cuddle with their pets and “hearty bowls of porridge” to stay warm this winter.
“Recently a link to a blog containing energy saving tips was sent to customers. We understand how difficult the situation will be for many of our customers this year,” a spokesperson for OVO Energy said.

CNN’s Charles RIley and Lianne Kolirin contributed to this report.