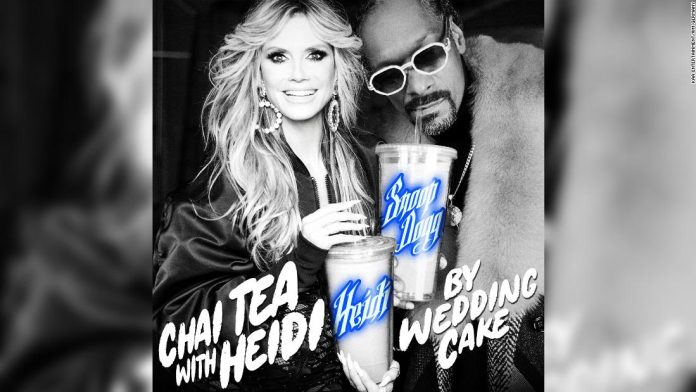 The 48-year-old German-American star has joined forces with hip-hop legend Snoop Dogg and released a single, “Chai Tea with Heidi.”
The dance track, produced by Weddingcake and released Friday, marks Klum’s return to the world of music 16 years after she released her 2006 holiday hit, “Wonderland.”
According to Klum, Snoop Dogg — real name Calvin Cordozar Broadus Jr. — was her first choice for a potential collaborator. In October last year, the mother-of-four hinted that they were making music when she shared a photo of the pair in a recording studio with her 8.9 million Instagram followers to mark Snoop’s birthday.
“I am a huge Snoop Dogg fan and I figured I needed to go big or go home,” the former “Project Runway” judge told the UK’s The Sun newspaper Thursday. “I contacted him about the idea and, to my surprise and delight, he invited me to come to his studio. I love a song that makes people want to dance and have fun… and Snoop helped deliver just that.”
“Chai Tea with Heidi” sample’s Rod Stewart’s 1983 classic, “Baby Jane,” with Klum singing the lines: “When I give my heart again, I know. It’s gonna last forever. No one tell me where or when, I know. It’s gonna last forever. When I fall in love again, I know. It’s gonna last forever.”
The record also serves as the opening track for the 17th season of Klum’s modeling competition reality series “Germany’s Next Topmodel.”
The accompanying black-and-white music video was shot by renowned photographer Rankin and sees Snoop lending his signature flow to the anthemic club track while sporting a fur coat and sunglasses. Klum struts her stuff in an array of form-fitting outfits.