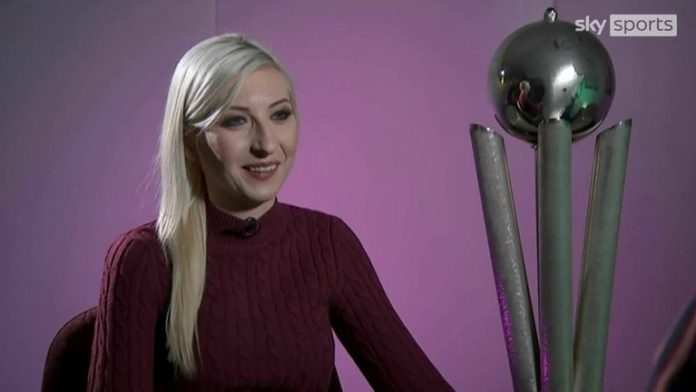 ‘Queen of the Palace’ Fallon Sherrock fails to win a PDC Tour Card after losing on the final day of Qualifying School in Milton Keyes, despite her best efforts; the 27-year-old will now concentrate on the PDC Women’s Series, with places in TV events, including the 2023 Worlds on offer

Fallon Sherrock’s ambitions of winning a PDC Tour Card are over after the ‘Queen of the Palace’ lost her second match on the final day of Q School on Saturday.

Sherrock, who defeated Wes Newton to book her place in the Final Stage of UK Q School, has endured a difficult last few days in Milton Keynes with early defeats to Danny Lauby, Josh Richardson and Justin Smith.

She went up against youngster Jarred Cole in her opening clash, and the ‘King of the Castle’ took Sherrock to a deciding leg shoot-out.

However, Sherrock produced a stunning 11-dart leg, including two maximums, before cleaning up 58 to seal her spot in the next round.

Sherrock then went up against Nathan Treadgold, but she fell 4-0 down to the Welshman before mounting a mini-fightback by winning three out of the next four legs. However, it was Treadgold who closed out the contest to end her hopes of progress.

Buckinghamshire thrower Sherrock has been aiming to become the second woman to land a spot on the PDC Tour after Lisa Ashton achieved the feat in 2020.

Knowing she had to win Saturday’s tournament outright in order to take her place among the darting elite, Sherrock was simply unable to take her incredible stage form on to the floor.

She also reached the quarter-finals of the Grand Slam of Darts, and finished as runner-up to Michael van Gerwen at the Nordic Darts Masters last year.

What’s next for Fallon?

Sherrock is a former two-time winner of the BDO British Classic women’s title, but she is determined to add to her trophy cabinet.

Other than exhibition events, Sherrock will also compete at an expanded Women’s Series, which will see 20 events take place at venues in the UK and Germany, with places in TV events, including the 2023 World Championship on offer.