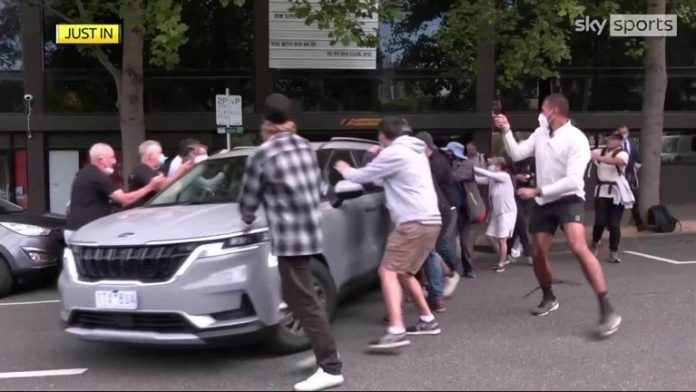 Novak Djokovic’s appeal against the re-cancellation of his visa will be held at 9.30am on Sunday (10.30pm on Saturday UK time); his lawyers argue his visa has not been cancelled on public health grounds, but because of how the unvaccinated player may be perceived by anti-vaxxers

Novak Djokovic has left his immigration detention hotel ahead of his appeal against the re-cancellation of his visa, which will be held at 9.30am on Sunday (10.30pm on Saturday UK time) before the Federal Court of Australia.

Djokovic returned to an immigration detention hotel in Melbourne for a second time on Saturday after visiting his lawyer’s offices as he continues to fight against deportation from Australia.

After a late-night hearing on Friday following the decision of Immigration Minister Alex Hawke to cancel Djokovic’s visa for a second time on the grounds of “health and good order”, a brief procedural hearing was held on Saturday morning.

The case has been transferred from the Federal Circuit Court and Justice David O’Callaghan confirmed the details agreed on Friday, with Djokovic’s team setting out their appeal by midday and Hawke given 10 hours to file his response.

Djokovic, who is engaged in a legal dispute with the Australian government over his right to remain in the country despite not being vaccinated against Covid-19, was expected to be detained on Saturday, per an agreement made on Friday by his representatives.

The scheduling of the hearing for Sunday means the Serb retains hope of beginning the defence of his Australian Open title on Monday, but his chances of going for a record-extending 10th win at Melbourne Park are currently hanging by a thread.

Djokovic’s legal team called Hawke’s judgement “irrational” and submitted a request for an injunction, delaying his deportation. The 34-year-old faces a potential three-year ban from travelling to Australia should he be deported and would only be permitted to return in ‘compelling circumstances that affect the national interest’.

The nine-time Australian Open winner was included in Thursday’s first-round draw, amid uncertainty over whether he would remain in the country, and Djokovic must now anxiously await a ruling to find out whether he can pursue his 21st Grand Slam title against unseeded Serb Miomir Kecmanovic on Monday.

“Today I exercised my power under section 133C(3) of the Migration Act to cancel the visa held by Mr Novak Djokovic on health and good order grounds, on the basis that it was in the public interest to do so,” Hawke said in his statement on Friday.

“The decision followed orders by the Federal Circuit and Family Court on 10 January 2022, quashing a prior cancellation decision on procedural fairness grounds.”In making this decision, I carefully considered information provided to me by the Department of Home Affairs, the Australian Border Force and Mr Djokovic.

“The Morrison Government is firmly committed to protecting Australia’s borders, particularly in relation to the COVID-19 pandemic.

“I thank the officers of the Department of Home Affairs and the Australian Border Force who work every day to serve Australia’s interests in increasingly challenging operational environments.”

The 20-time Grand Slam champion, who has won the Australian Open three straight years and nine times in total, had his visa cancelled upon his arrival in Australia on January 5 on the basis of medical exemption granted to him by Tennis Australia and Victoria State government.

He subsequently spent four nights in an immigration detention hotel before a judge overturned the decision.

Djokovic later admitted he made an “error of judgement” by attending an interview and photoshoot with a French newspaper after testing positive for COVID-19 last month, as well as addressing the false declaration on his travel form as a mistake made by his agent, which he put down as “human error” and “not deliberate”.

Australian Prime Minister Scott Morrison supported Hawke’s decision with a statement in which he reiterated the importance of protecting the public.

“The pandemic has been incredibly difficult for every Australian but we have stuck together and saved lives and livelihoods,” he said. “Together we have achieved one of the lowest death rates, strongest economies and highest vaccination rates in the world.

“Australians have made many sacrifices during this pandemic, and they rightly expect the result of those sacrifices to be protected.

“This is what the Minister is doing in taking this action today. Our strong border protection policies have kept Australians safe, prior to COVID and now during the pandemic.”

Former British No 1 Andrew Castle believes there could still be “some way to run” as the Australian government braces itself for an appeal from Djokovic’s lawyers.

“I remain slightly confused I have to say,” Castle told Sky Sports News. “Tennis Australia, the state of Victoria and the Federal Government laid out reasons why somebody could have a medical exemption to come in.

“Now of course there was a false declaration which Novak Djokovic has admitted and actually blamed his agent for on that visa form, perhaps that was the prime motivation for the immigration minister Alex Hawke to go ahead and revoke this visa for a second time.

“The reason why this has taken so long is I think the Australian government, the immigration office will be expecting an appeal from the very active Novak Djokovic lawyers in downtown Melbourne.

“One of the grounds for an appeal here would probably be proportionality. Now is saying that you haven’t travelled anywhere before coming to Australia good grounds for revoking a visa? These are the sorts of questions.”

‘This is such a mess’

“This is such a mess on the eve of the Australian Open.

“This is the world’s number one tennis player who has been at the centre of this saga for a week now and it is one of the most extraordinary spectacles in sport off the court of tennis because this has just been so bitter on both sides and it’s polarised the anti-vaccination debate and Novak Djokovic has of course said he didn’t get a jab because of his COVID status in December.

“He tested positive, we’ve seen the PCR certificate, but it’s really become much bigger than that and the majority of the Australian public, the polls suggested they wanted him kicked out and the Immigration Minister has now finally acted.

“There will though of course in this case be another round, because the Novak Djokovic legal team are expected to appeal in the courts in Australia, so he’s not quite on the first plane back to Serbia but it is now the Australian government who have taken their final decision and said ‘visa’s cancelled, he needs to leave Australia’, with just a day or two to go until the start of the Australian Open.”

Nadal: Aus Open will be great ‘with or without’ Djokovic

The Australian Open is more important than a single player and will be a great tournament “with or without” Novak Djokovic, says Rafael Nadal.

The Spaniard has made it clear on a number of occasions that he disagrees with Djokovic’s resistance to the Covid-19 vaccination and the degree to which his ongoing visa battle has overshadowed the tournament is clearly a frustration to
many.

Speaking at his pre-tournament press conference, Nadal said: “It’s very clear that Novak Djokovic is one of the best players of the history, without a doubt. But there is no one player in history that’s more important than an event.

Nadal added: “From my point of view, there is a lot of questions that need to be answered. In some ways I think it will be good if everything is clarified soon.

“Everyone chooses his road. I wish him all the best. I really respect him, even if I do not agree with a lot of things that he did the last couple of weeks.”