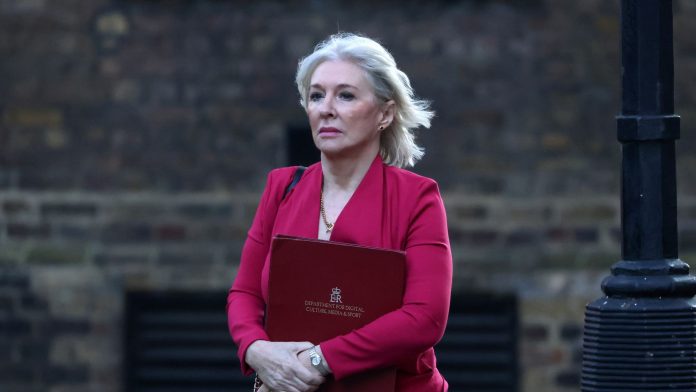 The Culture Secretary has seemingly confirmed reports that ministers will unveil a two-year freeze for the BBC licence fee this week.

The Mail on Sunday suggested the government would soon announce it will freeze the £159 annual charge until April 2024, meaning a severe real-terms cut in the corporation’s funding.

And later on Sunday morning, Nadine Dorries tweeted: “This licence fee announcement will be the last.”

She added: “The days of the elderly being threatened with prison sentences and bailiffs knocking on doors, are over.

The Sunday Times suggested the announcement was part of Number 10’s so-called “Operation Red Meat”, a number of eye-catching plans that will move attention away from Downing Street “partygate” and towards proposals which will appeal to Conservative backbench MPs.

If the licence fee cost was not frozen and rose in line with inflation – currently at 5.1% – the total annual fee would be £167 from April.

The news comes as Britons face a cost of living crisis, with the government under pressure to help keep household bills down.

Negotiations over the licence fee between the government and the BBC began in November 2020 under Oliver Dowden, the previous culture secretary.

The BBC is facing increased financial pressures and has recently carried out a large voluntary redundancy programme.