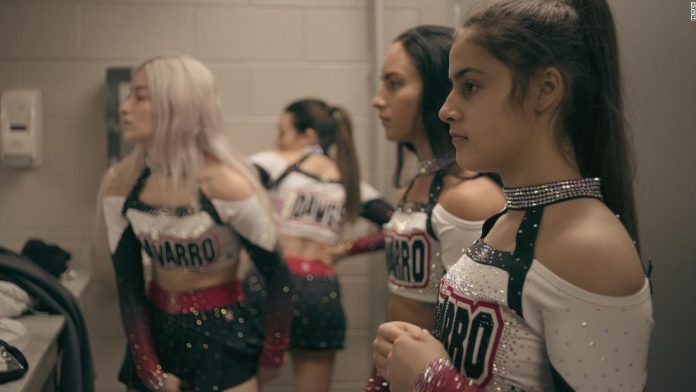 Optimism in the face of grief is the toughest combination (I’m thinking a great deal about this as I approach the one-year anniversary of the loss of my dad), but positivity can also propel you forward when it’s needed the most.
So eat the dessert, read the book, take the nap or do whatever else makes you happy at the moment.
That includes watching as much TV as you want. You deserve the break. We all do.

‘Cheer’ Season 2
So much has happened since season one of this inspiring Netflix docuseries that first debuted in 2020.
Not least of which has been the arrest and indictment of one of its stars, Jeremiah “Jerry” Harris, following allegations he enticed minors to engage in sexual activity.
That’s part of the story line for season two, which continues to follow the Navarro College cheer team’s quest to be the best despite challenges and setbacks.
The new season is streaming now.
‘Peacemaker’
Calling all fans of “The Suicide Squad.”
John Cena’s scene-stealing character, Peacemaker, gets his own spinoff series, in which we learn more about his personal life and he continues his ripped adventures.
It’s streaming on HBO Max, which is owned by CNN’s parent company.
‘Eternals’
Speaking of superheroes, Disney+ has the lock on all things Marvel — and it’s taking full advantage of that.
The latest addition to the Marvel Cinematic Universe streaming canon is the 2021 film about a group of eternal beings with superpowers who must do battle with a major enemy of mankind.
“Eternals” is streaming now.

No imposter syndrome over here. Elvis Costello & The Imposters are the real deal.
The legendary musician and his band have a new album, titled “The Boy Named If,” dropping Friday. It’s everything his die-hard fans expect and want of him.
He has also shown that he can grow with the times — announcing that he will no longer perform the song “Oliver’s Army” because it contains a racial slur.
Costello is asking radio stations to also retire the tune.
We are here for a mixtape — and FKA Twigs is bringing some heavy hitters with her “Caprisongs.”
Guest artists include The Weeknd, Daniel Caesar and Jorja Smith.
“CAPRISONGS is my journey back to myself through my amazing collaborators and friends,” she wrote on Instagram, adding that “it’s bronzer in the sink, alco pop on the side, a cherry lolly, apple juice when ur thirsty, friends in the park, your favourite person, that one sentence somebody said to you that changed everything, a club pre-game, your bestie who is always late but brings the most to the party, meeting a friend at the airport, just togetherness.”
Bring it on. The mixtape drops Friday.

The run-up to Janet Jackson’s two-night documentary, “Janet,” means we get more of her, it seems.
Not known for giving many interviews, Jackson sat down with the doyenne of fashion journalists, Robin Givhan, for an Allure magazine article.
And while it’s not dripping with tea, I will say I was most charmed by the fact that Jackson learned how to drive in her current home city of London (they do everything on the opposite side of the road from the States, remember) so she could decompress.
“Two things relax me, the ocean and driving. So I had to learn how to drive. I was tired of drivers driving me everywhere,” she said. “When I need to clear my head, I would go for a drive before, when I lived at the beach back home. That was always my thing.”
I wonder if, like me, Janet Jackson listens to Janet Jackson music while she’s driving.

Ben Affleck isn’t really worried about what you think of “Gigli.”
The 2003 film, starring Affleck and his then love and now current love, Jennifer Lopez, has been widely panned as one of the worst ever and bombed at the box office. But Affleck says he has no regrets.
In an Entertainment Weekly interview with his BFF Matt Damon, Affleck acknowledged the film doesn’t work but found a bright side: “But for being a movie that’s such a famous bomb and a disaster, very few people actually saw the movie.”
He said he now views it as a positive because “if the reaction to Gigli hadn’t happened, I probably wouldn’t have ultimately decided, ‘I don’t really have any other avenue but to direct movies,’ which has turned out to be the real love of my professional life.”
Affleck noted, “So in those ways, it’s a gift. And I did get to meet Jennifer, the relationship with whom has been really meaningful to me in my life.”
Way to make lemonade, Ben.