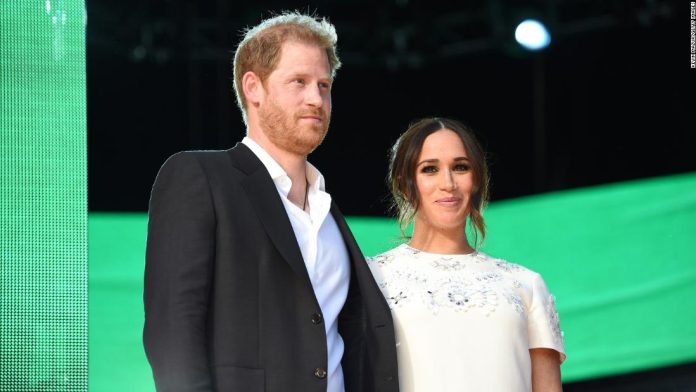 Harry’s legal team said they had initiated the legal challenge in September of last year but decided to make that information public now “in order to set the facts straight” because of a leak in a British tabloid newspaper.
Prince Harry, the Duke of Sussex, wants to bring his son Archie and baby daughter Lilibet to visit from the United States, but he and his family are “unable to return to his home” because it is too dangerous, a legal representative said in a statement Saturday.
In particular, Harry’s privately funded US security team “cannot replicate the necessary police protection needed” while they visit the UK, the representative added.
The claim follows an incident in London in the summer of 2021 when the prince’s security was compromised as he left a charity event, the statement added.
According to the legal representative, the Duke “first offered to pay personally for UK police protection for himself and his family in January of 2020 at Sandringham.” The representative said that offer was dismissed.
Harry met with his grandmother Queen Elizabeth, father Prince Charles and brother Prince William at the Queen’s Sandringham Estate in Norfolk, England, to discuss terms for the Sussexes’ departure from royal duties, days after the couple announced their decision to step back as “senior” royals.
The legal representative also said the duke “remains willing to cover the cost of security, as not to impose on the British taxpayer.”
After another attempt to negotiate on the issue was rejected, Harry sought a judicial review — a legal challenge to the lawfulness of decisions taken by a public body, in this case the Home Office — in September 2021, the statement said.
“The UK will always be Prince Harry’s home and a country he wants his wife and children to be safe in. With the lack of police protection, comes too great a personal risk. Prince Harry hopes that his petition — after close to two years of pleas for security in the UK — will resolve this situation,” the statement said.
According to a spokesperson for the Duke of Sussex, his team is currently filing documents which will summarize the grounds for contesting the Home Office decision.
Asked about the statement from Harry’s legal representatives, a government spokesperson said: “The UK government’s protective security system is rigorous and proportionate. It is our long-standing policy not to provide detailed information on those arrangements. To do so could compromise their integrity and affect individuals’ security.
“It would also not be appropriate to comment on the detail of any legal proceedings.”
Harry and his wife Meghan have lived in California since July 2020, after giving up their royal duties earlier that year.