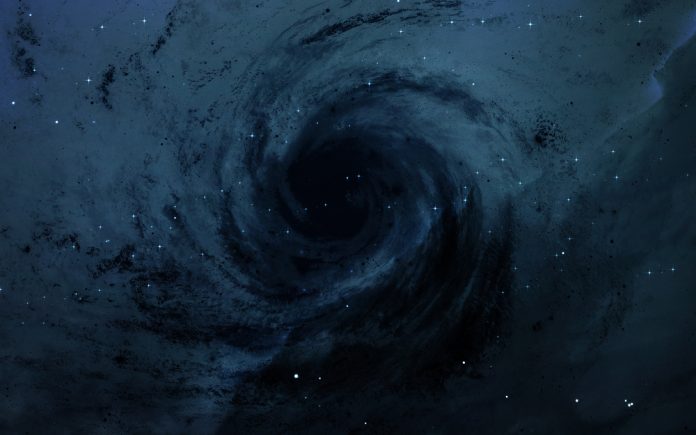 Since 2006, astrophysicists have shown through computer simulations that when two black holes merge, the gravitational waves emitted during this interaction carry linear momentum with them. This, in turn, could impart a recoil, or “kick,” to the product of that merger: a  bigger black hole.

Until now, this kick remained strictly theoretical. It could be gleaned from the equations of general relativity that were introduced by Albert Einstein in 1915 and from his prediction of gravitational waves one year later. But a preprint study released earlier this month (which is currently undergoing peer review) may provide the first evidence for the phenomenon based on actual astronomical data from a black hole merger. In fact, the kick velocity was probably high enough to send the black hole in question catapulting out of its galaxy of origin to a destination unknown.

“There had been previous attempts to see something like this,” says Vijay Varma, an astrophysicist at the Albert Einstein Institute in Potsdam who headed the nine-member research team. “The problem was that detectors had not been sensitive enough to pick out the subtle features in the gravitational wave signal that are needed to determine the kick velocity.”

But Varma and his colleagues analyzed new data that was released last November via a collaboration between the U.S.-based LIGO, the European-based Virgo, and the Japan-based KAGRA observatories. These leading facilities for gravitational wave astronomy, which had received recent boosts in detector sensitivity, picked up on a particular gravitational wave event — officially dubbed GW200120 —  which provided information on a black hole merger occurring roughly 3 billion light-years away.

When gravitational waves carry off angular momentum in one direction, the remnant black hole recoils in the opposite direction. (Credit: Vijay Varma)

A Lack of Symmetry

“It’s a nice study,” says University of Milano-Bicocca astrophysicist Davide Gerosa, who studies gravitational wave astronomy but was not affiliated with this research. “It relates to a fundamental prediction of general relativity from more than 100 years ago, and we’re now finally seeing it.”

The recoil estimated by Varma and his coauthors results from a hallowed law in physics: the conservation of linear momentum. “A rifle kicks back because a bullet carries away momentum,” Varma explains. And when gravitational waves carry off angular momentum in one direction, the remnant black hole recoils in the opposite direction.

It all comes down to symmetry, or the lack thereof, notes Scott Field, a mathematician at the University of Massachusetts-Dartmouth who co-authored the paper. If the event were perfectly symmetric — with two non-spinning black holes of equal mass coming together in pure harmony — “there would be no recoil. That’s because gravitational waves would be beamed ‘up’ and ‘down’ in roughly equal and opposite amounts, cancelling each other out, and thus no kick.” In a less idealized situation, however, some degree of recoil is inevitable.

A visualization of the binary black hole merger analyzed by Varma and colleagues. (Credit: Vijay Varma)

The size of that recoil would depend on the extent to which the spins of the two black holes are misaligned and start “precessing,” — or wobbling like tops before they fall over. “There wouldn’t be a kick without precession,” Field adds, “and the greater the precession, roughly speaking, the greater the kick.”

This principle was used in the calculation of the kick velocity associated with GW200129. While the group’s conclusions were based on real observations, they couldn’t literally watch the black hole move, Varma emphasizes. That motion had to be inferred.

Their analysis proceeded in two steps, drawing on two separate models that they developed for this study: One model, which incorporates existing solutions to the “field equations” of general relativity, helped them examine the gravitational wave signal from this event and extract information on the masses, spins and precession of the two black holes before they combined. Then, they applied their second model — also based on general relativity solutions — to harness the above information and predict the kick velocity. The most likely value falls around 3.5 million miles per hour.

If this black hole originated in a large, dense star cluster called a “globular cluster” — a common breeding ground for mergers where escape velocities are typically less than one-tenth the predicted kick velocity — “the odds of it having been ejected are close to 100%,” Field asserts. The gravitational field of the star cluster would not nearly be strong enough to keep the black hole from flying.

Leo Stein, a University of Mississippi physicist who was not part of the study, agrees with that assessment. “That big kick was big enough to (almost certainly) kick the remnant out of its cluster,” Stein says. “So it’s now a rogue black hole wandering around its galaxy, likely to never be heard of again.”

Current theories hold that a black hole forms when a heavy star exhausts its nuclear fuel and collapses. But those scenarios can’t account for the black holes bigger than 60 solar masses that LIGO and Virgo have already found. A plausible explanation: These outsized black holes form from mergers. Most importantly, pinpointing post-merger kick velocities can clue scientists into the distribution of black holes’ masses.

But the question remains: After two black holes merge, can they merge again and do so repeatedly? “Recoils are a key piece of the puzzle, because once [the black holes] are gone, they cannot merge again,” Gerosa explains. “The ability to merge again crucially depends on how big a kick they get.”

The only way to answer such questions is to gather more observations that provide information on the size (and velocity) of kicks that typically accompany the mergers of black holes. “In this way, we can build up statistics that help us constrain the rate of repeated mergers that occur in nature,” Varma says.

To this end, data collection at the big gravitational wave observatories is set to resume within a few months. Gerosa finds this prospect exciting. “More data mean more events and more chances that other exceptional events will turn up — maybe even more exceptional than this one.”

Citizen Science Month 2022: Turning Curiosity Into Impact Around the Country

Do Cats Have Dreams?

DeChambeau withdraws from Charles Schwab: ‘I don’t have endurance yet’

Roma vs Feyenoord ECL final preview | Jose: This is history