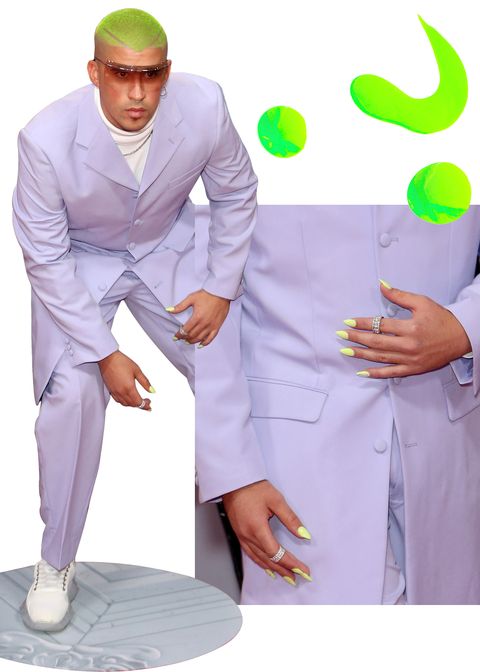 Two years ago, we heralded 2020 as the Year of the Menicure, and despite the jokes from the doubters, we were right. Not only about the name (a genius inversion of expectation, if we don’t say so ourselves), but the trend. Because flash forward to 2022 and the menicure hasn’t gone anywhere. In fact, its powers have only gotten stronger. There are whole Instagram accounts dedicated to men with manicures; the hashtag #boynails has 12.3 million views on TikTok; male celebrities from Pete Davidson to Lil Nas X to Bad Bunny are rarely seen without nail polish. We’re now living in a post-menicure world where it’s totally a thing to hear two dudes comparing their nail art at the bar. It only stands to reason then, that the evolution of the menicure would be the celebrity nail polish line. Friends, welcome to the Golden Age of Male Polish.

It started, of course, with Harry Styles. He might not have invented the idea of a guy wearing nail polish, but he was certainly instrumental in it reaching saturation. It’s now nearly impossible to separate the singer’s style from the happy, silly, brightly colored nail art he’s been showing off for years now. So, when he launched his beauty brand Pleasing back in November, of course nail polish would be front and center. The four colors—navy, pink, white, and translucent pearl—come as a set for $65 or separately for $20 each, and are designed to be worn by all genders, as referenced in the brand’s marketing s. It’s a smart move. Not everyone can pull off a leather suit with no shirt or a tulle skirt, but painting your nails is a low risk way to cop some of the singer’s style. 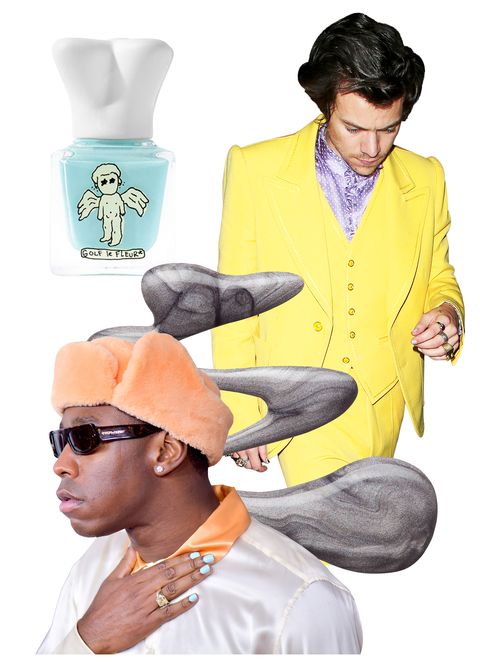 Next came Machine Gun Kelly with the launch of UNDN/LAQR, his own polish collection with the tagline “Don’t Huff The Paint.” The lineup is an extensive 10 shades with names like Mary Jane (green) and Twenty Five To Life (orange) that can also be purchased individually ($18) or as sets (with names like Wet Dream and Put Me On Top) for $52 (three colors) or $86 (six colors). Kelly, who is extremely committed to the polish game, chose to launch the line because “individualism is dying and self-expression is how we keep it alive,” he said through his publicist over email. “Nails are a canvas for people to express themselves and it should be fun without the pressure of having to be flawless.” His polish shades are designed to be mixed, matched, and layered on top of each other. Case in point: a cool splatter paint polish that looks like a tiny Jackson Pollock on the tip of your finger and can be used by itself or on top of another color for a dappled look. 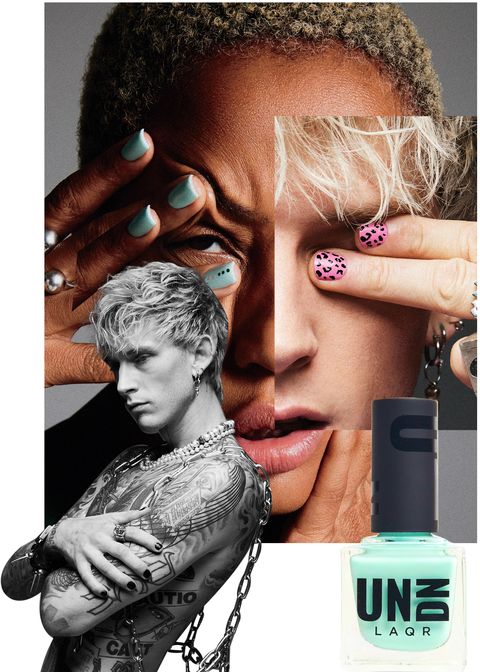 Not to be outdone, Tyler, The Creator expanded his Golf le Fleur line into fragrance and nail polish. The artist was an early adopter of the menicured look, so it’s no surprise that as his brand expands into lifestyle, he’d offer polish. In this case, it’s three gender neutral colors: Geneva Blue, Georgia Peach, and Glitter (for $20 each or $55 for the full set). He’s also teased that this is only the beginning of his foray into beauty and grooming. 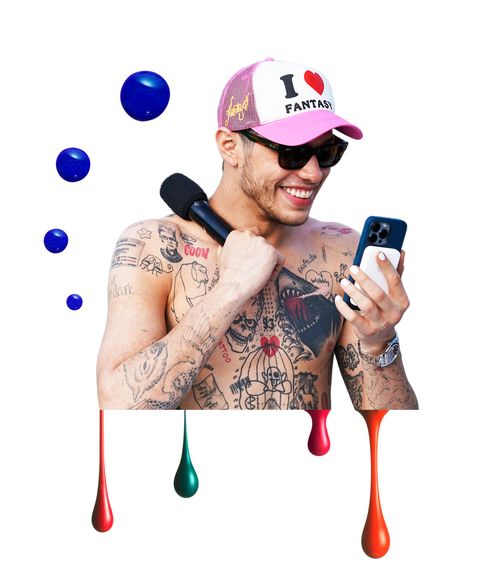 Truthfully, male-friendly nail polish collections aren’t brand-spanking new. Non-celebrity-backed brands like Faculty and To Be Frank have already created polish collections in dude-friendly shades and with more masculine (or at least unisex) packaging. And let’s get real, any bottle of nail polish will do when you have the inkling to paint your nails. But what’s so exciting about these new male celebrity polish lines is that they actually feel authentic. Harry Styles, Machine Gun Kelly, and Tyler, the Creator are all guys that we know actually wear nail polish proudly and often. These brands feel different than the type of celebrity brand that just seems like they’re fishing for a payday. These dudes, while three very different creatures, all seem to actually like the product they’ve put out and we, as customers, can actually believe they wear it—and want to wear it, too.

So if you’ve been waiting for a sign that it’s time to paint your nails, look to any of these new brands for inspiration. The first thing these guys would say is, “What are you waiting for?”

How to delete System storage on Mac

Show your support to software developers from Ukraine