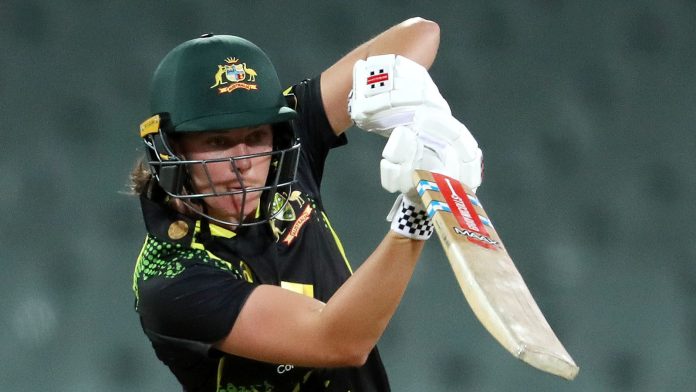 Australia beat England by nine wickets in the first T20I to take a 2-0 lead in the multi-format Women’s Ashes series; Tahlia McGrath takes 3-26 and thumps 91no in stand of 144 with Meg Lanning (64no) as home side race to victory in 17 overs; Danni Wyatt’s 70 from 54 comes in vain

Tahlia McGrath produced a brilliant all-round performance as Australia raced to a nine-wicket win over England in the opening match of the Women’s Ashes.

The 26-year-old took three wickets to slow England’s momentum and restrict them to 169-4 and then thumped a blistering unbeaten 91 from 49 balls to get her side home in 17 overs in the first T20 international at the Adelaide Oval.

Meg Lanning made 64 not out from 44 balls, in a partnership of 144 with McGrath, while Danni Wyatt’s 70 from 54 balls came in vain for Heather Knight’s side.

Holders Australia take a 2-0 points lead in the multi-format series ahead of two more T20s over the weekend before the Test match in Canberra next week.

On a very good batting surface, Australia captain Lanning chose to chase after winning the toss, where it was also confirmed that all-rounder Ellyse Perry – a star of previous Ashes series – had been left out.

The manner of Australia’s win ultimately justified that decision but when Wyatt and Beaumont took England to 51-0 after the powerplay, there may have been a few doubts.

Beaumount recovered from being hit flush on the helmet by a Tayla Vlaeminck bouncer and was also given a life on nine by McGrath, who shelled a tough return catch in the third over.

Wyatt then smashed back-to-back sixes over Jess Jonassen’s head and, helped by some uncharacteristic sloppiness from the Australians in the field, the runs kept coming in the first half of the innings.

The partnership had reached 81 when Alana King, on debut, had Beaumont (30 from 24) caught and bowled off a leading edge.

Wyatt went to her half-century from 39 balls later in the same over before Australia thought they had a second wicket soon after. Nat Sciver was given out lbw to Megan Schutt but quickly reviewed with UltraEdge showing she had got the toe-end of the bat on the ball before it struck the pad.

Sciver only lasted another three overs but did plenty of damage in that time, Nicola Carey coming in for particular punishment as 16 came from the 16th over.

With England headed for a big total Lanning went back to McGrath, and the all-rounder turned the game with two inch-perfect yorkers in the space of three balls; the first got through Sciver and splattered the stumps and two balls later, Wyatt was gone in an identical manner.

Both set batters gone, the big final push the tourists would have desired never came as McGrath ousted Amy Jones (4) and despite Knight (10no from nine) and Sophia Dunkley (10no from five) combining to score 14 from the last, the total came up well short of what appeared possible four overs earlier.

However, 170 still represented a record chase for Australia and when Sophie Ecclestone had the dangerous Alyssa Healy (7) caught in the fourth over, England were still firmly in the contest.

With Beth Mooney ruled out of the series due to a broken jaw, Lanning had been promoted to open and was joined by McGrath.

England’s bowlers kept it relatively tight during the powerplay but a mix of some powerful striking and excellent running between the wickets meant the score was always ticking over.

A potentially crucial moment arrived in the over after the powerplay when Lanning, on 24, appeared to edge leg-spinner Sarah Glenn behind on the cut but Jones could not cling on to it.

When Glenn continued for the ninth over, McGrath was set and really starting to motor as she clubbed the ball away leg-side. Maia Bouchier tried to cut it off but jammed her knee into the turf and stayed down, handing England an injury concern ahead of the two remaining T20s.

From that point on, Australia did not look back and boundaries almost came at will against an increasingly dispirited England bowling attack, with McGrath brining up her maiden T20I half-century from 28 balls.

Lanning followed her to the milestone from 38 balls a few overs later, by which time it was only a matter of when rather than if Australia would seal the win.

There was briefly the prospect of McGrath, who struck 13 boundaries and one six in her innings, reaching three figures as she moved to 90 with successive fours off Knight.

That would have required Australia turning down runs and manipulating the strike though, something Lanning had no interest in doing as she clubbed the winning runs from the last ball of the over to give her side the ideal start to the series.

Knight: Plenty of positives despite defeat

England captain Heather Knight: “I thought our batting was outstanding. For Danni and Tammy to come out and play like that – they took the game to the Aussies, which is what we want to do. Our score was probably about par but we were probably a bit rusty with the ball – too much width and didn’t quite bowl where we wanted to. But there were plenty of positives.”

Australia captain Meg Lanning: “We felt England’s score was about par so we weren’t too disappointed. We knew we needed to play really straight on that wicket and Tahlia McGrath was outstanding. I was watching from the other end and it was pretty intimidating. We were also probably looking a further 20 or 30 runs [for England] before she [got her wickets].”

Player of the match, Australia’s Tahlia McGrath: “It was a lot of fun in my home state. I was looking forward to this and to start off with a win, I’m super happy. I was excited to get out of my hotel room and bring on some more games!”

Both sides stay in Adelaide for two more T20 internationals on Saturday and Sunday before moving to Canberra for the Test match next week. Three ODIs will complete the multi-format Ashes series in early February, the first in Canberra and the final two taking place in Melbourne.

Meanwhile, the England men’s team begin their five-match T20I series against the West Indies with back-to-back matches in Barbados over the week.

The 13 Best Yoga Pants for Reaching That Ultimate Stretch