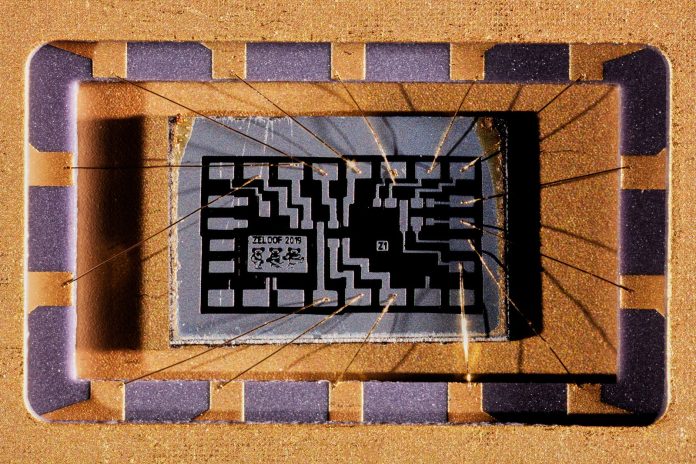 Zeloof spun hand-cut, half-inch squares of polysilicon, each to become a separate chip, on a small homemade turntable at 4,000 revolutions per minute to coat them with the photosensitive material needed to transfer his design onto the surface. Then his homemade photolithography machine beamed on his design: a grid of 12 circuits, each with 100 transistors (and a dancing bear), 1,200 transistors in all.

Each chip was then etched with acid and cooked in a furnace at about 1,000 degrees Celsius to bake in phosphorus atoms to adjust its conductivity. Three more rounds under the photolithography machine—separated by steps including time in a vacuum chamber filled with glowing purple plasma to etch away polysilicon—finished off each chip. Today’s commercial fabs produce chips in a broadly similar way, using a sequence of steps to gradually add and remove material in different parts of a design. Those chips are much more complex, with billions of much smaller transistors arrayed tightly together, and the steps are performed by machines not by hand. The transistors on Zeloof’s second-generation chips were about 10 times faster than those on his first and had features as small as 10 microns, not much bigger than a red blood cell.

In August, Zeloof tested the Z2 by hooking it up to a boxy beige semiconductor analyzer released by Hewlett Packard about two decades before he was born. A series of smoothly ramping current-voltage curves on its glowing green screen signaled success. “That curve was amazing to look at,” Zeloof says, “the first sign of life after you spend all day dunking this little shard of crystals into beakers of chemicals.”

How to celebrate when your homemade chip works? “Tweet it!” Zeloof says. His project has earned a dedicated Twitter following and millions of YouTube views, as well as some handy tips from veterans of the 1970s semiconductor industry.

Zeloof says he doesn’t know for sure what he wants to do after graduating this spring, but he has been thinking about the place DIY chipmaking might have in the modern tech ecosystem. In many ways DIY experimentation has never been more powerful: Robotics gear and 3D printers are easily bought, and hacker-friendly hardware like the Arduino microcontroller and Raspberry Pi are well established. “But the chips are still made in a big factory somewhere,” Zeloof says. “There’s been little progress with making that more accessible.”

Ellsworth, whose homebrew transistors inspired Zeloof, says there could be value in enabling high-quality hands-on chipmaking. “The tools we have today could put this within reach of small-scale operations, and for certain problems I think it makes a lot of sense,” she says. Ellsworth says chip technology seen as outdated to leading fabs can still be useful to engineers.

Zeloof recently upgraded his photolithography machine to print details as small as about 0.3 microns, or 300 nanometers—roughly on par with the commercial chip industry in the mid-’90s. Now, he’s thinking about the functions he could build into a chip on the scale of Intel’s historic 4004. “I want to push garage silicon further and open people’s minds to the possibility that we can do some of this stuff at home,” he says.

Barnes & Noble pressured to restrict sales of most banned book