Home Culture How ‘The Amazing Race’ handled its return on screen after covid pit... 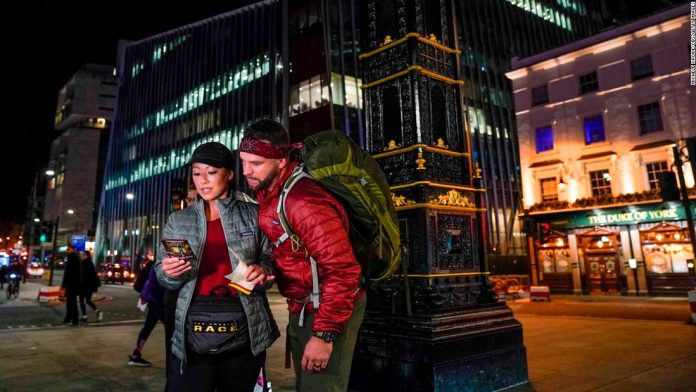 On Wednesday’s episode of “The Amazing Race,” the long-running reality programed showed viewers how it handled the return to competition after a 19-month break due to Covid-19. But not all the contestants who were there when the show stopped production decided to come back. In all, only seven pairs opted to continue their journey, including two teams that had been eliminated prior to the pandemic pause.
Flight attendants Raquel Moore and Cayla Pratt, friends Ryan Ferguson and Dusty Harris, married couple Akbar and Sheridan Cook, twins Lulu and Lala Gonzalez and internet personalities Kim and Penn Holderness returned to the race, which restarted in Switzerland.
Eliminated teams Michael Norwood and Moe Badger (the singing cops) and father-daughter duo Natalia and Arun Kumar also returned for a second chance at a million dollars.
Paris train heroes Anthony Sadler and Spencer Stone, “Love Island” couple Caro Viehweg and Ray Gantt, married couple Connie and Sam Greiner and YouTubers Taylor Green-Jones and Isaiah Green-Jones chose not to return. No explanation for their decision was shared in the episode.
At the end of last week’s episode, host Phil Keoghan was shown explaining to nine pairs of contestants that the show was shutting down production because of the increasing risk of the virus. That scene was filmed in late February 2020.
Wednesday’s episode briefly touched on the contestants themselves and how their lives were upended during the pandemic.
Moore and Pratt spoke about losing their jobs. Lulu and Lala Gonzalez shared that their grandmother had lost her life to Covid-19, and they said they were running the race in her memory.
The heartfelt moment was followed by another, with Keoghan putting a twist on his signature phrase, excitedly telling the contestants, “I’m pleased to tell you the world is waiting for you once again.”
The race itself was not without its adjustments, of course. Instead of vying for seats on commercial flights, teams will be going to their destinations on a chartered plane, and because of the risks presented on public transportation, Keoghan warned, there will be more self driving during the legs.
In the end, it was a driving mistake that sealed the fate of singing cops Norwood and Stone, who were the first pair eliminated this season and eliminated once again on Wednesday.
If you expected “The Amazing Race” to play nice in the first leg back after a 19-month pause, you’re not alone. I anticipated a pity non-elimination leg and was shocked when Keoghan delivered the news to the cops.
I understand the move, though. It’s not called “The Amazingly Nice Race.”