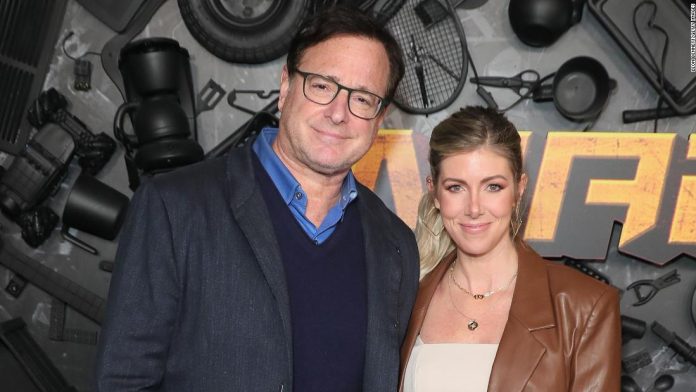 In her first televised interview since Saget was found dead in his Orlando, Florida, hotel room following a stand-up comedy performance, Rizzo talked to Hoda Kotb about her husband. The couple married in 2018.
The comic was very happy to be out on the road again and felt compelled to make people laugh given the current state of the world, she said.
Rizzo shared that their final communication was filled with love. “I think I said ‘I love you dearly’ and he said ‘I love you endlessly’ and then I said ‘I can’t wait to see you tomorrow,” she said. “It was just all love.”
Saget met Rizzo, a food and travel blogger, via Instagram six years ago and the pair shared a deep and abiding love. Both she and Kotb were moved to tears when Rizzo talked about how her husband would rush back whenever he was on the road.
He would go to sleep at 2 a.m. and wake up at 4 a.m. just so he could be on a 6 a.m. flight to come home to her, Rizzo said.
“He valued every single second we had together,” she said, fighting back tears. “That is why this is so heartbreaking.”
In the wake of his death everyone, including fans, has rallied around Rizzo. “That has been the one silver lining from this is the incredible outpouring of love and support, not only from just everybody that loved Bob, but also his friends and family,” she said. “I don’t know how else I’d be getting through this right now.”
Rizzo shared memories about who her husband was — with a common theme being how incredibly loving he was to everyone he met, making sure to tell everyone he loved them.
Her husband was as wonderful as he seemed and tried to make everyone feel special, Rizzo said, with his constant message being to “treat everybody with kindness.”
Saget was “the best man I’ve ever known in my life,” she said. “He was just so kind and so wonderful and everybody that was in his life knew it,” Rizzo said. “And even anybody that would just casually meet him was like, ‘Wow, this is a special guy.'”
RIzzo is now concentrating on continuing his legacy, including his work with the Scleroderma Research Foundation.
Saget’s sister, Gay, died from the rare autoimmune disease and the SRF estimates that in the more than 30 years he volunteered with the organization he helped raise more than $26 million to help find a cure.
“He had three life’s works,” Rizzo said. “That was his children, comedy and then the SRF. He spent over 30 years tirelessly working so hard to try and find a cure for scleroderma and that’s why anything I can do to help keep that legacy going and just help with the SRF because it meant so much to him.”

4 Facts About Asteroids You May Not Have Known

‘Obi-Wan Kenobi’ brings ‘Star Wars’ out of the desert and onto...

US and Taiwan could begin talks on closer economic ties ‘in...