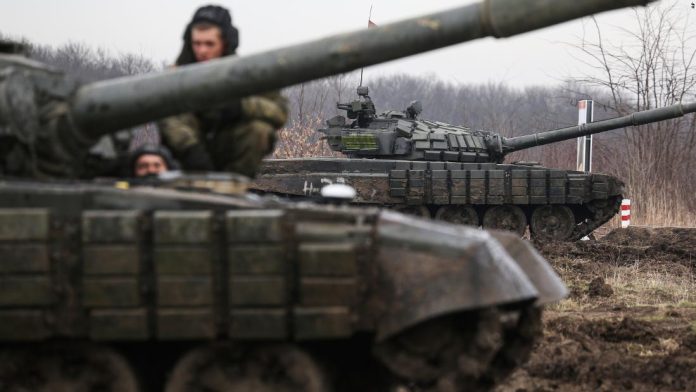 They were also met with concern in Europe, where officials and observers said Biden’s candid remarks had turned a spotlight on an uncomfortable truth at a dangerous moment.
Foreign diplomats and experts said Biden’s comments were also an acknowledgment of a harsh reality: as tensions rise on the Ukrainian border, NATO allies are not all on the same page.
During a rare news conference on Wednesday to mark the anniversary of his inauguration, Biden said: “It’s one thing if it’s a minor incursion and we end up having to fight about what to do and not do. But if they actually do what they’re capable of doing with the forces amassed on the border, it is going to be a disaster for Russia if they further invade Ukraine.”
When asked to clarify what a “minor incursion” was, the President said he drew the line at “Russian forces crossing the border, killing Ukrainian fighters,” before adding that “there are differences in NATO as to what countries are willing to do, depending on what happens.”
The White House later clarified that Biden would consider any movement of Russian troops over the border as an invasion and would act accordingly — and that lesser acts of Russian aggression, like a cyberattack, would be met with a reciprocal response.
There is “some truth there, which didn’t need to be said out loud,” one NATO diplomat told CNN Thursday. “It’s not like the Russians didn’t know that, say, a cyber-attack against Ukraine wouldn’t trigger a full-scale response.”
This sentiment was echoed by a senior EU diplomat who said, “I think he was actually quite truthful in what he said. Whether it was politically OK, I don’t know.”
The fear is that Biden saying this publicly will give Russian President Vladimir Putin the green light to escalate what is already a very dangerous situation. Biden said in the same answer that he predicts Russia will “move in” to Ukraine, which warned earlier this week that the build-up of Russian troops near the border between the two nations was “almost completed.”
The NATO diplomat who spoke to CNN said that there is a “lack of clarity” over what the specific response would be from NATO allies to specific Russian actions.
“There aren’t yet staked out positions,” the diplomat explained, but said it would probably “break out on the lines you would expect — US, UK, Canada, Denmark, Norway, Easterners would have a low-trigger threshold, everyone else a higher one.”
Europe’s disunity, while less dramatic than Moscow might like, was visible earlier in the week, when French President Emmanuel Macron said the European Parliament should seek to agree a new security deal with Russia and enter its own dialogue with the Kremlin.
Macron has long supported the EU taking greater control of its defense and security capabilities and has led calls for a standing European army.
However, even EU member states are divided on how far that should go. And countries that previously lived under the rule of the Soviet Union are deeply skeptical of doing anything that might undermine NATO, the US-led military alliance that underpins European security. Most European countries are members of NATO.
Riho Terras, a former commander of the Estonia’s military, said, “Macron has an infamous quality to think out of the box and throw ideas that have little to do with the real world,” and that his “proposal to launch the EU dialogue with Russia falls to the same category.”
Alexander Stubb, former prime minister of Finland — another country that shares a border with Russia — says that while “strengthening European defense would certainly help, it would not be in Finland’s interest to duplicate what NATO is already doing.” Finland is not currently a NATO member.
What impact will Biden’s words actually have on the situation in Ukraine? Experts were divided given the unpredictability of the situation.
Terras said Russia invading Ukraine “a bit more” was not something the West should tolerate and that Biden’s comments could “simply encourage Putin to seize the opportunity and launch a ‘minor incursion’ but by his (own) definition.”
Velina Tchakarova, director of the Austrian Institute for European and Security Policy, believes that Biden’s comments will have “a devastating psychological effect on the European NATO allies as well as the Ukrainian establishment,” but that they would likely not factor in Putin’s thinking much because “Moscow is used to the diplomatic language of Western officials and does not take it at face value.”
Keir Giles, a senior fellow at Chatham House and author of the forthcoming book “How Russia Gets Its Way,” says: “the effect of his comments in Russia may well be just as much confusion they have caused elsewhere, as Russia’s government apparatus struggles to unscramble the mixed messages from Washington.”
On the whole, most EU officials that spoke to CNN don’t think that Biden’s comments will prompt a major escalation from the Kremlin. What they are deeply upset by, however, is the finger being pointed at Europe’s disunity on security quite so directly.