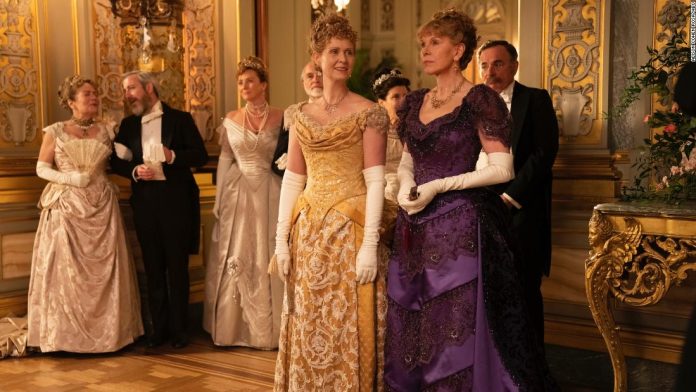 The backdrop here lies not in British aristocracy but rather the hostility of old-money families toward what they dismissively refer to as “the new people,” those who have recently come into fortunes but lack the arrived-on-the-Mayflower claims to elite status.
That intra-class warfare and the ostentatious displays of wealth associated with it are viewed in part through the wide eyes of a new arrival, Marian Brook (Louisa Jacobson, the youngest of Meryl Streep’s talented acting daughters), who, after the death of her father, travels from rural Pennsylvania to reside with her two aunts, the imperious Agnes van Rhijn (Christine Baranski) and mousier Ada Brook (Cynthia Nixon).
Agnes married well, allowing her sister, as she notes, “the pure and tranquil life of a spinster.” Like the Dowager Countess in “Downton,” Fellowes graces her with all the best lines, which Baranski delivers with dripping venom, her fangs barely concealed.
To her constant irritation, the “new” people to whom she objects reside directly across the street, in the form of railroad baron George Russell (Morgan Spector) and his wife Bertha (Carrie Coon), who employ a Downton-like array of servants. When not maintaining the mansion, the downstairs folk gossip about the Russells’ prospects of being accepted into high society, which is Bertha’s relentless goal.
“She’s built a palace to entertain the sort of people who will never come here,” sneers Bertha’s maid (Kelley Curran), while plotting as to how she can escape such service.
This American version also brings race into the mix, with Marian’s trip introducing her to Peggy Scott (Denée Benton), an aspiring Black writer who takes a position in Agnes’s employ. Marian’s desire to become Peggy’s friend betrays both her naivete and the overt racism of the times, though with marginal depth, a perhaps inevitable function of everything else that’s unfolding upstairs and downstairs.
Fellowes remains an absolute master at juggling a dizzying number of subplots as well as finding intriguing wrinkles in characters with relatively small roles, such as Blake Ritson as Agnes’s scheming son. There’s a particular embarrassment of riches on the actress side, with Audra McDonald, Jeanne Tripplehorn and Donna Murphy to help class up the already-classy joint.
The early episodes (five of the nine were previewed) also impressively chew through story, indicating that while the dresses might look stiff and confining, the pacing isn’t.
The casting is as impeccable as the period costumes, with Jacobson as the marginally modern newcomer caught in the middle of these old grudges, and Coon and Spector excelling as the ultimate power couple, playing a long game in leveraging their wealth to break down the barriers erected by the entrenched establishment.
One of the tensions involves the question of Marian marrying for something other than financial advantage, a prospect greeting with horror by her pragmatic aunt. “Will you concede nothing to my age and experience?” Agnes asks her.
Although real-life figures from the period pass through the story, “The Gilded Age” quickly carves out a dense reality all its own. And while several characters have obvious “Downton” counterparts (including life in the closet for gays during this era), the Yankee flavor distinguishes the series enough to stand apart from it.
It’s early to pronounce this fully as another “Downton”-like addiction, with one movie and another on the way. Yet Fellowes has laid out the foundation for a period soap with that lofty potential, in what is already a very enticing piece of “Abbey”-adjacent real estate.
“The Gilded Age” premieres Jan. 24 at 9 p.m. ET on HBO, which, like CNN, is a unit of WarnerMedia.