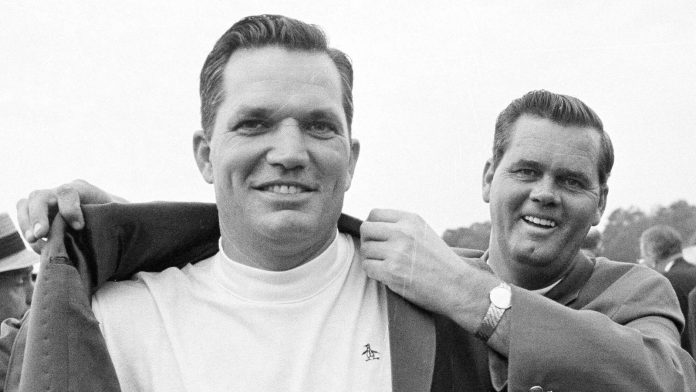 Bob Goalby claimed a one-shot victory over Roberto De Vicenzo to win The Masters in 1968; The American also won 11 times on the PGA Tour and twice on the PGA Tour Champions

Former major champion Bob Goalby, who won The Masters in 1968, has died aged 92.

The American is most recognised for his lone major victory at Augusta National, when he claimed a one-shot victory when Roberto De Vicenzo famously signed for the wrong scorecard.

Goalby had followed back-to-back birdies from the 13th with an eagle at the par-five 15th to close a final-round 66, which was enough for victory when De Vicenzo signed for a four instead of a three on his penultimate hole to finish a shot behind him.

“Bob Goalby was one of the true gentlemen in the game of golf, and we are deeply saddened by his passing.” [1/2] pic.twitter.com/rGdGVUvy4I

Fred Ridley, chairman of Augusta National and The Masters said: “Bob Goalby was one of the true gentlemen in the game of golf, and we are deeply saddened by his passing.

“He demonstrated tremendous play, sportsmanship and humility in his 1968 Masters victory and has worn the Green Jacket with distinction ever since. His victory will always be remembered and celebrated at Augusta National and the Masters Tournament.”

Goalby was among the players who boldly led the Tournament Players Division to break away from the PGA of America and become what now is the PGA Tour, alongside the likes of Arnold Palmer and Jack Nicklaus. In his later career, he joined Gardner Dickinson and Dan Sikes in 1980 to organize a tour for players 50 and older.

“To the men of his era, Bob [Goalby] was a leader, but he had a lot of humility,” said Jay Haas, a nine-time PGA Tour winner, Presidents Cup captain and Goalby’s nephew.

His first win was the 1958 Greater Greensboro Open and the last of his 11 PGA Tour titles was the Bahamas National Open in 1971. He played in one Ryder Cup, in 1963 at East Lake in Atlanta, with Palmer as the playing captain.

3 Cocktails That’ll Transport You to Bermuda