Home Sport Kane: Spurs must ‘take advantage of best in the world’ Conte 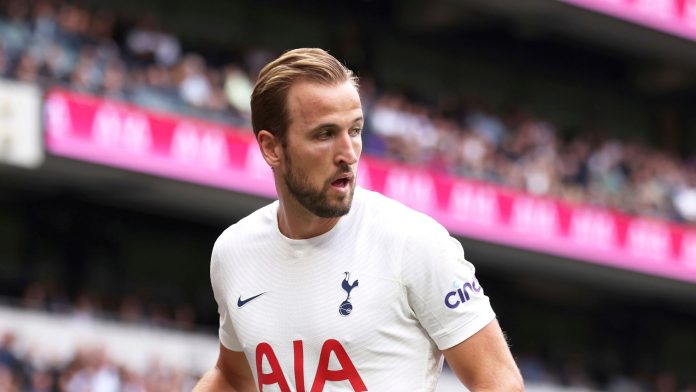 Harry Kane has issued a rallying cry to his Tottenham team-mates to “take advantage” of playing under Antonio Conte and work to return the club to the “highest level”.

Spurs finished in the top four for four successive seasons between 2016 and 2019 under the guidance of Mauricio Pochettino, but have recorded sixth and seventh-place finishes in the Premier League since the Argentinian was sacked in November 2019.

The north London side have also dispensed of the services of Jose Mourinho and Nuno Espiritio Santo since then as they attempt to repeat the success of their time under Pochettino, who led them to the Champions League final just months before his departure.

But while Kane admits Spurs have “taken a dip” over the last few seasons, he is confident Conte – a Premier League and FA Cup winner with Chelsea – is the person to improve their fortunes, as long as the players meet his demands.

In an exclusive interview with Sky Sports, the England captain said: “He’s one of the best managers in the world.

“We’ve not really reached the heights we’ve wanted to as a club over the last couple of years. It’s a big opportunity now to take advantage of what we’ve got.

“He’s a manager that demands a lot. He’s doing everything he can and as players we’ve responded really well to him and everyone’s working as hard as possible to get success. That’s the ultimate goal for everyone here at the club.”

And while Kane – one of only two current Spurs players who were at the club before Pochettino’s arrival – is unable to pinpoint the exact reason for the club’s decline, he believes the departure of so many key players inevitably had a negative effect.

“The fact is, in the Premier League especially, so many teams are so good and everyone’s building to try and break into that top six. There’s a good eight or nine teams who are fighting for those places.

“If you don’t get one or two things right then you can really fall behind the pack and that’s kind of happened to us. So we need to be careful that we don’t keep falling.

I just want to be playing at the highest level possible. I’m not going to go into loads of detail about anything else going on.

“We’re feeling confident that we can do that, especially since the manager’s come in.”

While Kane is optimistic for the future under Conte, the Italian has not held back in his assessment of the squad he inherited in November, and has publicly expressed his desire to “rebuild” a team that he has described as being in the “middle”.

But instead of railing at his head coach’s harsh words, Kane – who revealed his own wish to leave the club last summer – welcomed them, saying: “You need to be honest with yourself. As a club we’ve not achieved what we’ve wanted to over the last couple of years for sure.

“We’ve taken a dip in terms of where we were three or four years ago. It’s important that you do realise that – that is the truth.

“We need to respond, and as players it’s our responsibility to try to show the manager that we’re capable of taking this team back to the highest level.”

Although Kane is excited to be working with Conte, he has not committed his future to Spurs beyond the end of this season.

The 28-year-old wanted to leave to boost his chances of winning silverware and Premier League champions Manchester City were keen to sign him, but Spurs chairman Daniel Levy refused to sanction the sale of his star striker, who has two-and-a-half years remaining on his contract.

Asked if Conte’s arrival and the sense that he is moving the club in the right direction was making him feel more content, Kane said: “I just want to be playing at the highest level possible.

“My focus is fully on this season and trying to get as high up the league as possible. We’re still in the FA Cup and we’re trying to win a trophy.

“I’m not going to go into loads of detail about anything else going on. It’s just about working hard for the team and trying to improve.”

Follow every Tottenham game in the Premier League this season with our live blogs on the Sky Sports website and app, and watch match highlights for free shortly after full-time.

Get all this and more – including notifications sent straight to your phone – by downloading the Sky Sports Scores app and setting Tottenham as your favourite team.