Home Culture Christina Aguilera reveals her ‘Fuerza’ in her first Spanish album in over... 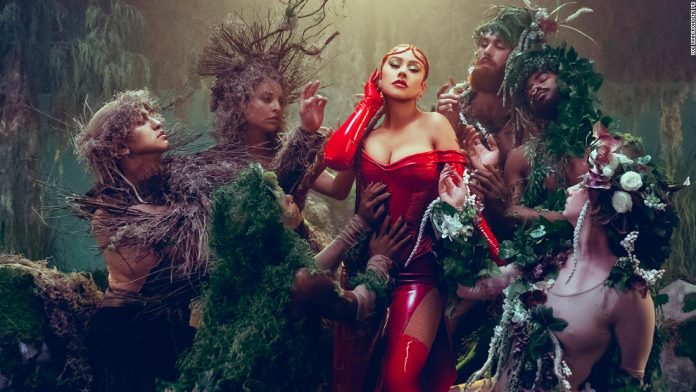 The EP from Aguilera, who is of Ecuadorian descent, includes singles “Pa’ Mis Muchachas,” a collaboration with Becky G, Nicki Nicole, and Nathy Peluso; and a classic ballad, “Somos nada,” which she sang for the first time on stage last November during the Latin Grammy’s.

Almost 22 years have passed since Aguilera released “Mi Reflejo,” her only album in Spanish.
Her return to Latin market was imminent in her career, she told CNN en Español’s Zona Pop at a press conference..
“‘Mi Reflejo’ had been such a beautiful, special time in my life, but it was 20- plus years ago when I was coming on the scene. I was so green to the business. I was baby Christina,” the singer said. “20 years later, I’m a grown woman who had such an incredible career. Now I get to come back having reflected on that.”
Aguilera also said as a mother now, she relishes the chance to share her Spanish music with her kids because it’s “a big part of them and who they are.”
“And so, they can see mommy do her thing in Spanish, they can hear it and feel it from a musical level,” Aguilera said.
“La Fuerza” is just the first of three releases she hopes to make in 2022.
Aguilera said she will address her relationship with her father in one releasing later in the year.
“I have a little bit of an estranged relationship with my father. I’ve spoken openly about it in the past,” she said. “I do address my father, and it’s the first time I … am coming from a place where I’m making peace with certain parts of my past.”
On a “deeper level,” she added, “this album means a great deal to me just because I’ve been able to embrace so many things about who I am and where I am now.”

Two of the songs from “La Fuerza” are collaborations, something common in Latin music.
“Latin music is such a community-based, beautiful environment, and there’s so much love there that I wanted to make it a unified experience,” Aguilera told CNN en Español.
“It’s more important to me now that I do things with artists who I not only admire, but I know I’m doing it because I love and want the experience. The experience outweighs any other thing to me. And at this point in my life and career, it’s important for me to do things that I love to do and not for any other reason,” the singer said.
In her first single, “Pa’ Mis Muchachas,” Aguilera surrounded herself with feminine powerhouses.
“I have so much admiration for other strong women and women who speak their truth,” she said.
Nicki Nicole, Aguilera said, “reminds me a lot of me coming up — so fresh and new in the business when I did my first Spanish album.” Nathy Peluso, meanwhile, is “so incredible on stage” and “a natural mover and performer.”
“I get mesmerized when I watch her,” she said. “And then you have Becky G, who represents such a strong, polished, smart little businesswoman. I love having conversations with her.”
Working on this song, the singer recalled her experience making 2001’s “Lady Marmalade,” in which Aguilera joined forces with singers Mýa, Lil’ Kim, and Pink.
“I loved doing ‘Lady Marmalade’ back in the day,” Aguilera said, “and every different woman representing who they are as strong women.”
A theme of empowerment that seems to have no language barriers.
“La Fuerza” releases on Friday.

Toto, to “Africa” and beyond