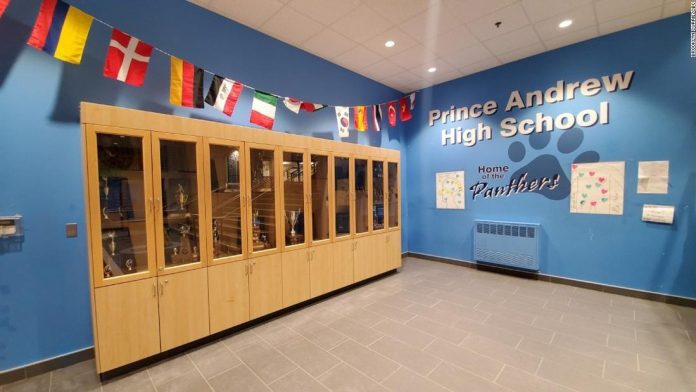 “We are changing the name to move in a different direction due to the negative reports about Prince Andrew,” school principal Craig Campbell told CNN in an email. “We hope to build our identity as a positive, supportive school community with a name to match.”
Local residents will have a chance to submit name suggestions to a six-person renaming committee that includes students, staff and community members. The top three names will then be recommended to the Halifax Regional Centre for Education, which will have final approval.
The school’s decision follows a ruling from a New York judge earlier this month that a civil lawsuit against Prince Andrew may move forward.
The 61-year-old royal is being sued by Virginia Giuffre, who alleges she was trafficked by disgraced financier Jeffrey Epstein and forced to perform sex acts with the prince at the age of 17. Prince Andrew has vigorously denied those claims.
The allegations against the prince have tarnished his public standing and prompted other members of the royal family to distance themselves from the Duke of York.
Most recently, Prince Andrew was stripped of his honorary military titles and charities. A royal source confirmed to CNN’s Max Foster Prince Andrew will also no longer use the style “His Royal Highness” in any official capacity.
The Canadian school joins a lengthy list of institutions that have decided to remove ties to controversial namesakes in recent years.
Across the United States, school boards and districts have opted to find new names for schools named after Confederate leaders or other public figures — such as actor Bill Cosby, who saw his name removed from buildings, workshops and a professorship as a criminal trial against him unfolded.