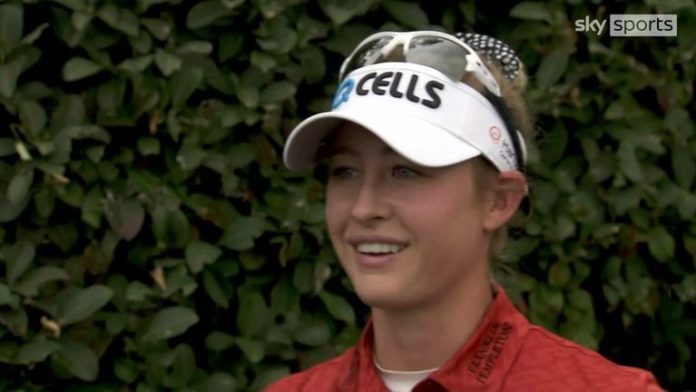 Korda overcame a bogey on the fifth hole at the Lake Nona Golf and Country Club to record seven birdies, hitting 10 of 14 fairways and tying for the lowest round of the day; first-round leader Lopez shot four-under par to stay within one of the lead

World No 1 Nelly Korda shot a six-under-par 66 on Friday to vault herself past Mexico’s Gaby Lopez and into the lead at the LPGA’s Tournament of Champions in Florida.

Korda tied for the lowest round of the day as she moved to 10-under for the tournament after the second day at the LPGA’s season-opening event.

The American overcame a bogey on the fifth hole at the Lake Nona Golf and Country Club to record seven birdies, hitting 10 of 14 fairways.

“I kind of feel more at home here,” Korda said. “I love the golf course, love the layout. I love that it’s a good challenge, the rough is pretty thick this year, too.

“So I kind of like to embrace those challenges.”

Lopez, who led at five-under after the first round and was the 2020 event champion, shot a four-under 68 to stay within a stroke of the lead at nine-under.

She is tied for second place with Danielle Kang, who shot a five-under 67. Kang delivered an eagle on the par-four seventh hole and avoided bogeys all day. Using an iron from a rise that splits the seventh fairway, Kang hit her approach shot to the front of the green with her ball rolling directly into the cup.

Jessica Korda kept herself within striking distance Friday by firing a five-under 67. Jessica Korda is alone in fourth place, two shots behind her sister.

France’s Celine Boutier also had a five-under 67 and is tied for fifth place with Canada’s Brooke M. Henderson at seven-under.

England’s Georgia Hall dropped back to tied 17th after failing to advance with a level par round of 72 that leaves her two-under for the tournament.

The event format pairs players with 50 celebrities and amateurs who are competing in a Modified Stableford scoring format.