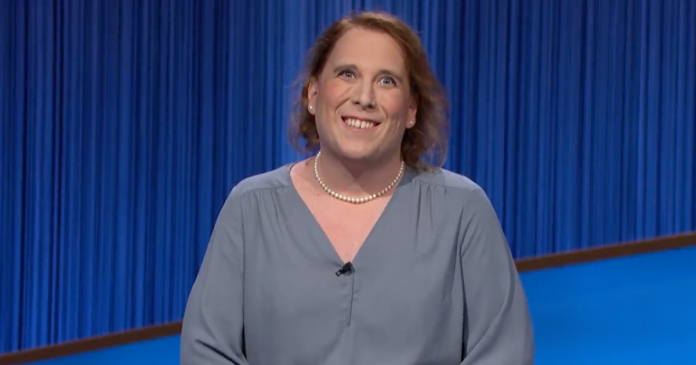 Amy Schneider continued her climb up the “Jeopardy!” leaderboard on Friday, tying Matt Amodio’s second-place record for consecutive wins. Schneider, the first woman to break $1 million in winnings on the quiz show, has now won 38 games and $1,307,200.

To win her 38th game, she beat out an office manager from Georgia and a PhD student from Wisconsin. She found and correctly answered two Daily Doubles, and cruised into “Final Jeopardy” nearly $29,000 ahead of her second-place competitor. A correct answer about “Mountains” gave her another $20,000, bringing her winnings for the day to $54,000.

The win comes just a week after she broke the third-place record held by fellow “Jeopardy!” great James Holzhauer. When asked how it felt to have caught up to Holzhauer, Schneider said beating him had become “a target of mine” after she began to do well on the show.

She also spoke about beating Holzhauer on Twitter, writing that “One thing that may or may not be coming across is just how much fun I was having during all this! The winning is nice, sure, but it was also just a rewarding experience to be so focused on one particular thing.”

Now, only one “Jeopardy!” great — current host Ken Jennings — stands between her and the longest consecutive win streak. But Jennings is still far ahead, having won 74 games during a historic run in 2004. Schneider is in fourth place for the total amount of money won in regular season play, behind Jennings, Holzhauer, and Amodio.

Schneider is also the first transgender “Jeopardy!” contestant to qualify for the Tournament of Champions, and is the highest-earning female contestant in the show’s history.

Victoria Albert is a News Editor at CBS News. Reach her at victoria.albert@viacomcbs.com