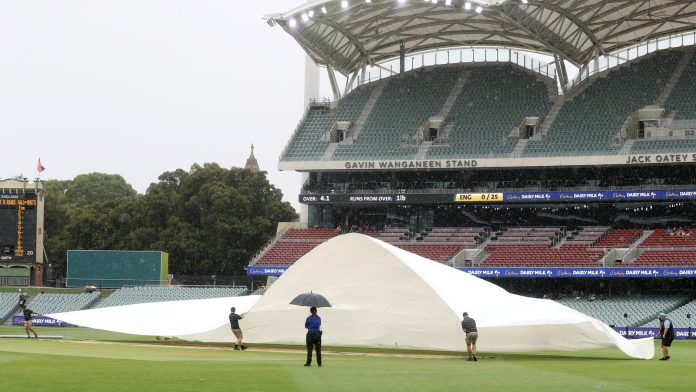 ​​Rain wrecked the second T20 international of the multi-format Women’s Ashes series with just 25 balls possible in Adelaide on Saturday.

The game had been cut to 14 overs a side after an initial shower and the players were then taken from the field 4.1 overs into the reduced match after further wet weather, with the fixture subsequently abandoned as the rain continued to fall.

England had reached 25-0 after being inserted by Australia, with Danni Wyatt 14 not out and opening partner Tammy Beaumont unbeaten on six.

Australia and England picked up one point apiece from the washout, meaning the hosts and trophy holders lead 3-1 having won Thursday’s opening game at the same venue by nine wickets following a superb all-round performance from Tahlia McGrath.

McGrath claimed three wickets as England posted 169-4 from their 20 overs, before hitting 13 fours and a six in an unbeaten 91 from 49 deliveries to take Australia to victory with 18 balls to spare.

The third and final T20 will be held at Adelaide on Sunday (3.10am GMT), before the sides meet in a standalone Test match in Canberra (January 27-30) and then three one-day internationals (February 3, 6 and 8), with the first 50-over game in Canberra and the final two in Melbourne.

The forecast is not great for Sunday’s final T20, with England all-rounder Nat Sciver saying: “We have to come to the ground switched on and ready for any length of game.”

Wyatt top-scored for England on Thursday with 70 from 54 deliveries and she struck two fours during the short amount of action on Saturday.

England handed a T20 international debut to off-spinner Charlie Dean – the 21-year-old, who took 10 wickets in five ODIs against New Zealand at home last summer, replacing batter Maia Bouchier as the tourists went in with an extra bowling option in their XI.

Sciver said of Dean: “She is a great addition to our squad. She will throw herself into anything whether it is batting, bowling or fielding. She will really add something when she eventually gets onto the pitch.

“It’s great to have so many different people come straight into the team and make an impact, which Charlie did in the ODI series in England.”

1️⃣4️⃣ overs per side

IT20 debut for Charlie Dean!

The game also marked the 50th in T20 international cricket for England left-arm spinner Sophie Ecclestone, who is top of the bowling rankings in the format.

Australia were missing fast bowler Tayla Vlaeminck due to a right foot injury, with Darcie Brown – the third-highest wicket-taker in this season’s Women’s Big Bash League – stepping in.

The T20 portion of the series concludes on Sunday with the third T20 in Adelaide (3.10am GMT), before the sides play one Test match and three one-day internationals.

The England men’s team begin their five-match T20I series against the West Indies with back-to-back matches in Barbados this weekend, starting with the opener from 8pm GMT on Saturday.