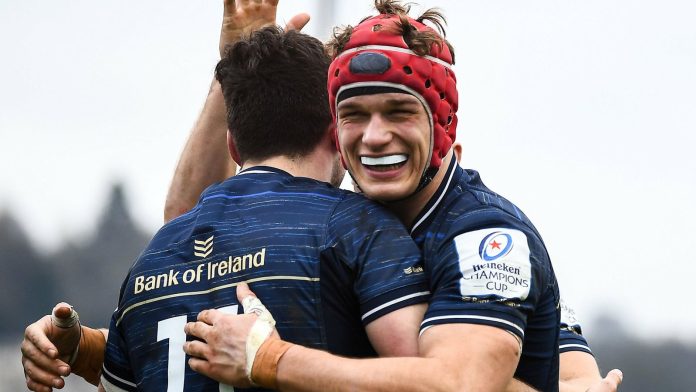 We recap the latest Heineken Champions Cup action as Harlequins booked a top-two seed via a controversial win, while Leinster smashed Bath to qualify for the Round of 16…

Alex Dombrandt completed a controversial hat-trick deep into stoppage time as Harlequins snatched a 36-33 Heineken Champions Cup victory over Castres at the Stoop.

Dombrandt touched down with an outstretched arm in the 85th minute – the final act of play, with replays seeming to show the ball short – to preserve Quins’ perfect record in the group stage.

An unpredictable clash saw the lead regularly change hands but it was the Top 14’s third-placed team who appeared to be finishing stronger until a late rally from the Gallagher Premiership champions led by Dombrandt.

The ending was rough on Castres, with Scottish referee Mike Adamson missing two forward Quins passes by Marcus Smith, and were unrewarded for a seemingly legitimate turnover with the clock in the red.

To compound things, TMO Brian MacNeice then awarded Dombrandt’s try despite the on-field call being ‘no try’ and images seeming to suggest the No 8 was short and then knocked the ball on.

The victory was significant for Harlequins as it guaranteed them second place in Pool B and home advantage for the second leg of the Round of 16 and for the quarter-finals too, while Castres were dumped out where victory would have seen them through.

Leinster marched on in the European Champions Cup with a 64-7 demolition of a Bath side whose wretched run of form and injuries continued with another head injury to England flanker Sam Underhill.

Jimmy O’Brien crossed four times as the Irish province finished their Pool A fixtures with 15 points and a points difference of +136 – despite forfeiting their second game in Montpellier 28-0 due to Covid issues.

Leinster, who ran in 10 tries, fielded eight of the Ireland starters who toppled the All Blacks, including captain Johnny Sexton, but Bath began brightly.

Unfortunately, three games in Round 4 were lost to Covid-19 enforced cancellations.

Despite defending champions Toulouse naming a squad of 23 to face Cardiff, Covid cases at the club into the double figures caused the EPCR to call off the match and award Cardiff – yet to win a game this season in Europe – a 28-0 bonus-point win which may yet see the Welsh side into the round of 16.

Toulouse responded angrily, with president Didier Lacroix saying the club would take legal action after the enforced cancellation, terming it a “total lack of respect” and adding: “We cannot let this injustice pass.

“It’s not just one case, many clubs have already been wronged and it is time for this to stop. We are talking about the credibility of this competition.”

A second game fell by the wayside when Bordeaux discovered positive cases in their camp on Friday just before they were due to travel to England to face Leicester, forcing them to pull out and the Tigers awarded a bonus-point 28-0 win.

That second Covid cancellation ensured Leicester could not be caught at the top of Pool B, handing them home advantage until the final should they make it that far.

A third cancellation arrived on Saturday when Northampton disclosed cases which saw their trip to Paris to play Racing 92 called off, and the French outfit handed a 28-0 win which assures them of top spot in Pool A – despite playing just two games – and, like Leicester, home advantage until the final should they progress.

Can Northern Ireland impress at Euro 2022?