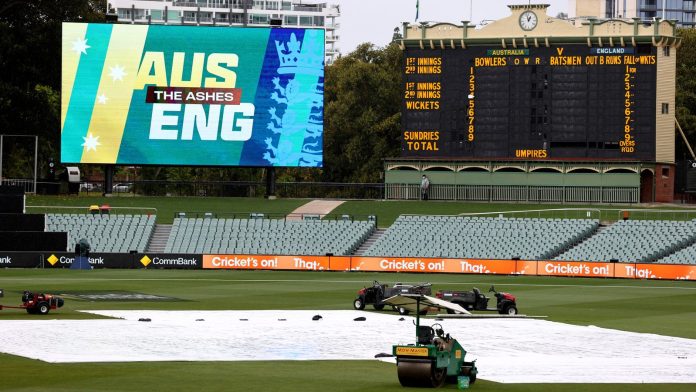 Australia and England take one point each from third T20I washout in Adelaide; Meg Lanning’s hosts lead England 4-2 and will retain the Ashes if they win next week’s standalone Test match in Canberra; Australia fast bowler Tayla Vlaeminck (foot) to miss rest of Ashes and 50-over World Cup

Rain hit the Women’s Ashes for the second day running as England and Australia’s third and final T20 international at Adelaide Oval was abandoned without a ball bowled.

With the second T20I on Saturday also washed out, Australia lead the multi-format series 4-2 – the sides picked up a point apiece from each of the rained-off games this weekend after Australia took the first two points on offer with a nine-wicket win in Thursday’s series opener.

Australia will retain the Ashes with victory in the Test match at Manuka Oval in Canberra next week (January 27-30) as that result would see them bag four points and take their tally to an unassailable eight.

England would still be able to match that total by winning the three one-day internationals that follow on February 3, 6 and 8 but need to win the series outright to claim the Ashes for the first time since 2013/14.

No play was possible at all in Adelaide on Sunday due to heavy rain as the T20 portion of the series concluded in damp fashion, with England and Australia forced to share the points for the second time in as many days.

Saturday’s second T20 international had seen just 4.1 overs of action – England reaching 25-0 after being asked to bat by Australia, just as they had been in the first game of the series.

England carded 169-4 in the first T20 international – Danni Wyatt top-scoring with 70 from 54 balls – but that total proved insufficient as Australia chased it down with 18 balls to spare.

Tahlia McGrath followed a three-wicket haul in the England innings with an unbeaten 91 from 49 deliveries as she bossed an unbroken 144-run stand with skipper Meg Lanning (64no off 44).

All-rounder Ellyse Perry was left out of the three T20 internationals but looks certain to return for the four-day Test with her record against England in international red-ball cricket quite stunning.

The 31-year-old has hit 213 not out, 116 and an unbeaten 76 in her previous three innings against England in the format, taking her average against Heather Knight’s side to 78 from eight games.

Opening batter Beth Mooney is also in contention for the Test match, according to Australia head coach Matthew Mott – Mooney missed the T20s after fracturing her jaw but has already returned to light training.

Australia unbeaten in Tests since 2014

Australia have not lost a Test match since going down to England by 61 runs in Perth in 2014. Meg Lanning’s side won the 2015 match at Canterbury by 161 runs before the 2017 and 2019 games, at Sydney and Taunton respectively, ended in draws.

Australia bowler Vlaeminck out of Ashes and World Cup

However, fast bowler Tayla Vlaeminck will not play again in this Ashes series or the 50-over World Cup in New Zealand from March 4 after suffering another stress fracture in her right foot.

Vlaeminck, one of the quickest bowlers in the women’s game, played in the first T20 international, recording figures of 0-29 from four overs, but then pulled up sore and was seen in a moon boot on Saturday.

The 23-year-old missed the 2020 T20 World Cup due to a similar injury and will now miss the 50-over version next month.

Vlaeminck, who recorded over 76mph on the speed gun during the first T20 international, has made just 24 appearances across the formats since debuting for Australia in October 2018.

“The Cricket Australia and Cricket Victoria medical teams will work collaboratively on the immediate management over the coming days and a subsequent return to play plan. She will be unavailable for the Ashes series and ODI World Cup.”

Vlaeminck’s absence is another injury blow for Australia, who are also missing spinners Georgia Wareham (ACL) and Sophie Molineux (stress fracture of the foot) – Wareham will not return until next season although Molineux may recover in time for the World Cup.

The four-day Women’s Ashes Test begins at 11pm UK time on Wednesday. The winners of that game will earn four points, while the teams will take two points each in the event of a draw. Three one-day internationals, on February 3, 6 and 8, follow the Test.

The England men’s team continue their five-match T20I series against the West Indies on Sunday night (8pm UK time) with game two in Barbados. Eoin Morgan’s side will be looking to rally from a nine-wicket defeat in Saturday’s opening fixture, in which they were bowled out for just 103.