Home Sport Zverev out of Australian Open after loss to Shapovalov 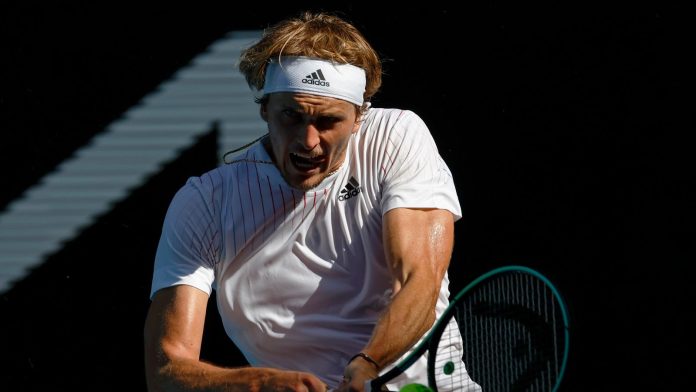 The third seed fell 6-3 7-6 6-3 at the hands of his Canadian opponent; Alexander Zverev went into the encounter holding a 4-2 lead in their head-to-head record; Denis Shapovalov will now meet Rafael Nadal in the quarter-finals

Alexander Zverev has been knocked out of the Australian Open after a straight-sets 6-3 7-6 (7-5) 6-3 loss to Denis Shapovalov, while Rafael Nadal moves into his 14th quarter-final in Melbourne.

The third seed, who was a semi-finalist in Melbourne in 2020, struggled to find his game throughout the match and his errors were capitalised on by his Canadian opponent.

Shapovalov secured the match on his second match point and progresses into the quarter-finals of the Australian Open for the first time in his career.

The 22-year-old will now face 20-time Grand Slam winner Nadal, who overcame Adrian Mannarino earlier in the day on Sunday.

“I’m very happy with my performance and happy with where my game is at,” Shapovalov said after his victory. “I was really feeling my shots on both wings and I played smart tennis.”

Shapovalov had spent almost 11 hours on court to progress through the first three rounds at Melbourne Park, winning twice in four sets and once in five.

And he was slightly surprised by the relative speed of his two-hour and 21-minute victory over the third seed.

“It was probably the one I least expected to finish in three,” he said with a smile.

The 22-year-old hit 35 winners to Zverev’s 18 during the course of their contest. He was effective when coming into the net too, securing 22 of 27 points there and worked well behind his first serve.

Double faults were a feature of Shapovalov’s game, he delivered 11 in total and knows that facing Nadal in the quarter-finals will be a challenge.

“It’s always an honour to go up against a guy like Rafa,” the Canadian said. “It’s going to be a tough one and I’m definitely going to enjoy it.”

Nadal made his way into the quarter-finals a victory over Mannarino, one that featured an “emotional” 28-minute tie-break in the opening set.

The 20-time Grand Slam champion was put under huge pressure by his French opponent but found his best tennis when he needed to in order to win the tie-break 14-12.

“The first set was very, very emotional and anything could have happened in it,” he said. “I was lucky in the end and had my chances, he had a lot of chances too.

“Everybody knows how this game is about the mental side too and it’s a tough one. After the crazy first set I think it was so important to break at the beginning of the second,” Nadal added.

As Nadal highlighted, losing such a gruelling tie-break was tough for Mannarino to take. In contrast, the Spaniard embraced the momentum from it and took the second and third sets 6-2.

Victory from Nadal secures his place in the quarter-finals for a 14th time, only Roger Federer has reached that stage of the Australian Open more often.

“Denis [Shapovalov] is a player with amazing potential, everybody knows that,” Nadal said about his next opponent. “When he’s playing very well it’s very difficult to stop him with his amazing serve, he’s forehand and he’s very quick.

“I’m happy to be in the quarter-finals and I know I need to play very, very well to keep having chances. I’m just enjoying today and I’m going to try my best.”

Your Next Therapist Could Be a Chatbot App

President Xi: No need to change the system under which Hong...