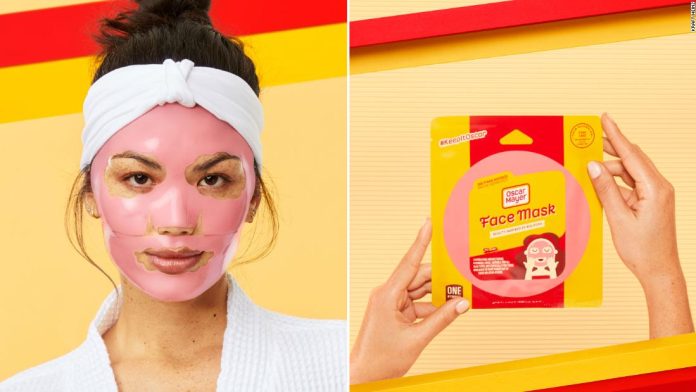 We’ve done the dutiful task of rounding it all up if you need a change of pace from the doom and gloom of all that other “news.” Here’s what happened:

Oscar Mayer debuted a bologna-inspired face mask that quickly sold out. The new product isn’t actually a slab of meat. Rather, Kraft Heinz (KHC) partnered with Seoul Mamas, a Korean skin care company, to create a “hydrating and restoring hydrogel” mask that promotes skin elasticity, improves hydration and moisture retention.
The $5 skin care product was created as a “playful spin on the often serious ‘New Year, New You’ trope with its meaty take on the self-care space,” Kraft Heinz said in a press release. It will be restocked on Amazon in the coming days.

M&Ms’ anthropomorphized chocolate characters are getting a makeover, the candy maker announced this week. Their most noticeable change: new shoes.
Bear with us here: Green has swapped her go-go boots for sneakers. Brown is sporting lower, more sensible heels. Red and Yellow’s shoes now have laces. Orange’s shoe laces are no longer untied. (Much safer now.) And Blue’s shoes, while little changed, resemble what Anton Vincent, president of Mars Wrigley North America, described as “a bad version of Uggs.”
Mars Wrigley, which owns M&Ms, is trying to make the characters — particularly the female ones — more “current” and “representative of our consumer,” the company said.
The M&M logo, last tweaked in 2019, is also getting an adjustment. Instead of resting on its side, it’s set up straight. The new orientation is designed to emphasize the ampersand.
Coca-Cola (CCEP) is unveiling a new look for its flavored Coke products later this month. It’s part of the company’s renewed focus on its Coke brand, as it dumps low-selling niche products and tries to drum up excitement for its core beverages.
In the United States, new versions of Cherry Coke cans and bottles now come in magenta, with the white Coca-Cola logo emblazoned on the regular version and a black Coca-Cola logo on the Zero Sugar version. The new Vanilla Coke cans and bottles are cream-colored, and the Cherry Vanilla flavor’s new packaging is a mix of the two hues (heavy on the magenta).
The idea is to “modernize and simplify the look … [and] help consumers find the flavor they’re looking for on the shelf,” said Natalia Suarez, senior brand manager of Coke Choice Portfolio, the company’s North America operating unit.

Love at White Castle is getting canceled because of Omicron. The burger chain’s restaurants in select markets have long held a special dining-in experience on February 14 for lovesick couples who want to remember their special day with $1 burgers and french fries.
But as the highly contagious variant surge continues, White Castle announced that it won’t be doing the event at all this year. Rather, it’s marking the date with a to-go celebration in a very pink “Love Cube” meal box for two. It includes eight cheese sliders, two small soft drinks and a choice of two shareable sides for about $15. And what says love better than that?
–CNN Business’ Parija Kavilanz and Danielle Wiener-Bronner contributed to this report.