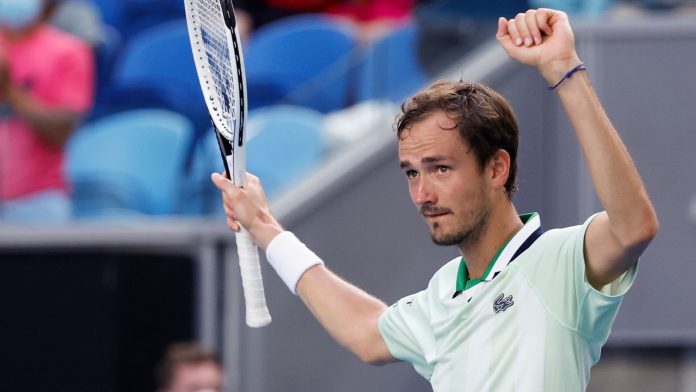 Daniil Medvedev held off unseeded American Maxime Cressy to set up a quarter-final clash with Felix Auger-Alissime at the Australian Open and stay on course for successive Grand Slams.

French-born American Cressy plays a throwback serve-and-volley game and has had an excellent start to the season, reaching the final of the Melbourne Summer Set.

“It was not easy,” said the second seed. “If I wouldn’t win the fourth one, I’d probably be in a difficult mental shape because I had so many break points. Hell of a match. The fourth set was crazy.”

Medvedev ranted about the match being boring and declared it his unluckiest day ever as Cressy kept hitting the lines on big points before the Russian eventually took his ninth break point of the fourth set.

Auger-Aliassime, 21, joins compatriot Denis Shapovalov in the last eight, marking the first occasion that multiple Canadian men have reached the quarter-finals at a Grand Slam.

British duo through to last-eight in Melbourne

Joe Salisbury and Neal Skupski made it into the quarter-finals of the men’s doubles.

Salisbury is looking to reach a third straight final with American partner Rajeev Ram after winning the title in 2020 and finishing runners-up last year.

They have been untroubled so far and beat Australian wild cards Dane Sweeny and Li Tu 6-4 6-4 in the third round.

Skupski and new Dutch partner Wesley Koolhof have made a dream start together, winning two ATP Tour titles in the build-up to the year’s first Grand Slam.

They will take on Australians Matt Ebden and Max Purcell in the last eight while Salisbury and Ram meet Italians Simone Bolelli and Fabio Fognini, with the winners to face each other in the semi-finals.

Explore the world this summer with Hilton