Home World Who is Nusrat Ghani, the British lawmaker who says she was fired... 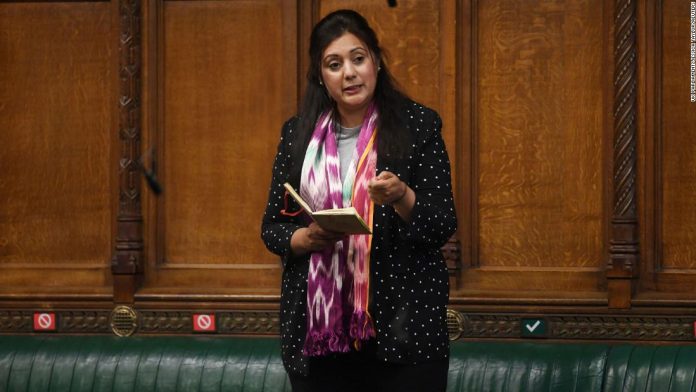 Who is Nusrat Ghani?

Ghani is the Conservative MP for Wealden, in southeast England.
She was first elected in 2015. In 2018, she became the first female Muslim minister to speak from the dispatch box in the House of Commons, but she lost her job as Transport Minister in February 2020.
Speaking to The Sunday Times newspaper, the Tory MP this weekend claimed that her “Muslimness was raised as an issue” when she asked for an explanation as to why she had been fired.
Ghani said the government whip — who organizes the party’s contribution to parliamentary business — told her that her faith was “making colleagues uncomfortable.”
On Sunday, Ghani released a statement asking the government to address the controversy “seriously.”

What’s led to this?

Ghani told the Sunday Times that, since being fired in 2020, “not a day has gone by without thinking about what I was told and wondering why I was in politics while hoping for the Government to take this seriously.”
“Those that have not had their identity and faith questioned cannot fully appreciate what it does to you. Now is not the time I would have chosen for this to come out and I have pursued every avenue and process I thought available to me, but many people have known what happened,” the British MP added.
In a statement posted to Twitter, Ghani said: “When I told the Prime Minister in June 2020 what had been said to me in the Government Whips’ Office I urged him to take it seriously as a Government matter and instigate an inquiry.”
“He wrote to me that he could not get involved and suggested I use the internal Conservative Party complaint process,” she said.
“This, as I had already pointed out, was very clearly not appropriate for something that happened on Government business — I do not even know if the words that were conveyed to me about what was said in reshuffle meetings at Downing Street were by members of the Conservative Party,” she added.

How has the government reacted to Ghani’s allegations?

Ghani’s allegations were strongly denied by the Conservatives’ chief whip Mark Spencer, who said her comments in The Sunday Times were “defamatory,” according to the UK Press Association (PA).
Meanwhile, Deputy Prime Minister Dominic Raab told Sky News on Sunday that while Ghani’s allegation was “incredibly serious” and that the Conservative Party has “zero tolerance for any discrimination and any Islamophobia,” there would not be a Conservative Party investigation unless a formal complaint was made.
A Downing Street spokesman confirmed to PA that Ghani had not made a formal complaint, adding: “The Conservative Party does not tolerate prejudice or discrimination of any kind.”
Health Minister Sajid Javid wrote on Twitter that: “This is a very serious matter which needs a proper investigation. I would strongly support her in making a formal complaint — she must be heard.”

Will there be an investigation?

On Monday, Downing Street confirmed it would investigate Ghani’s claims.
“At the time these allegations were first made, the Prime Minister recommended to her that she make a formal complaint to CCHQ. She did not take up this offer,” a spokesperson for Downing Street said Monday.
“The Prime Minister has now asked officials to establish the facts about what happened. As he said at the time, the Prime Minister takes these claims very seriously,” the statement added.
Ghani welcomed the Prime Minister’s decision to investigate the claims in a statement posted on Twitter on Monday.
“All I want is for this to be taken seriously and for him to investigate,” Ghani said.
Following the allegations, the opposition Labour Party and backbench members of the Conservative Party, as well as several faith organizations, including the Muslim Council of Britain, had called for an investigation.
Caroline Nokes, a Conservative MP who is chairwoman of the Women and Equalities Committee, said on Twitter: “This is appalling, Nus is an outstanding MP and was a great Minister. Her faith has never made me (or any other colleague) ‘uncomfortable.'”
In response to The Sunday Times report, Labour Party leader Keir Starmer said on Twitter, “This is shocking to read, the Conservatives must investigate immediately … There’s report after report of appalling behavior and lack of respect at the center of this government. Culture is set at the top.”

What does it mean for Boris Johnson?

Ghani’s allegations are the latest in a string of controversies to hit the UK Prime Minister in recent weeks.
Johnson is under pressure over alleged summer garden parties and Christmas gatherings held in Downing Street when the rest of the country was under strict Covid-19 lockdowns and restrictions.
A report into the allegations, set to be released this week, could be the final straw for Johnson’s increasingly mutinous party.
Meanwhile, Johnson’s approval ratings are plunging and there appears to be a growing sense among some parts of his ruling Conservative Party that he is becoming a liability.
Two polls in the last week suggested that as many as two-thirds of voters want him to resign, and a parliamentary rebellion is growing, with one Conservative MP last week defecting to the opposition Labour Party. Newspapers have reported rumors of more lawmakers demanding Johnson’s exit.